Jefferson County (county code JF) is a county located in the U.S. state of Kansas. At the 2010 census, the county population was 19,126. Its county seat is Oskaloosa, and its most populous city is Valley Falls.

In 1854, the Kansas Territory was organized, then in 1861 Kansas became the 34th U.S. state. In 1855, Jefferson County was established, and was named for President Thomas Jefferson. Settlement of the county was slowed by events prior to and during the Civil War, but the present day unincorporated community of Thompsonville (3 miles northwest of Perry on the Delaware River) was the first established in 1851 by Mormon settlers who initially refused to accompany the main group led by Brigham Young to the Salt Lake Valley. The settlement was first abandoned due to the violence resulting from the border wars, but was re-established when the Civil War ended. 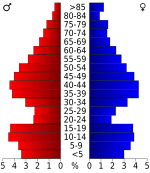 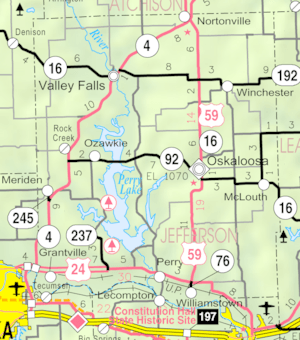 Jefferson County is divided into twelve townships. None of the cities within the county are considered governmentally independent, and all figures for the townships include those of the cities. In the following table, the population center is the largest city (or cities) included in that township's population total, if it is of a significant size.

All content from Kiddle encyclopedia articles (including the article images and facts) can be freely used under Attribution-ShareAlike license, unless stated otherwise. Cite this article:
Jefferson County, Kansas Facts for Kids. Kiddle Encyclopedia.