A portion of the Salt Lake Valley with Oquirrh Mountains in the background as seen looking southwest from City Creek Canyon. 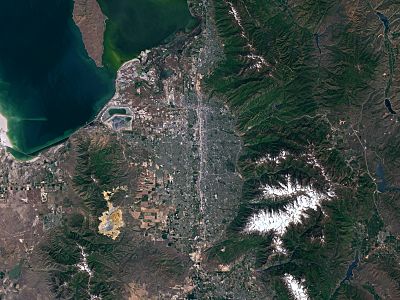 Greatest vertical relief in the valley. Twin Peaks has a rise of 7099 ft or 2164 m from the valley floor.

Salt Lake Valley is a 500-square-mile (1,300 km2) valley in Salt Lake County in the north-central portion of the U.S. state of Utah. It contains Salt Lake City and many of its suburbs, notably Murray, Sandy, South Jordan, West Jordan, and West Valley City; its total population is 1,029,655 as of 2010. Brigham Young said "this is the right place", when he and his fellow Mormon settlers moved into Utah after being driven out of several states.

The Valley is surrounded in every direction except the northwest by steep mountains that at some points rise 7,100 feet (2,200 m) from the valley floor's base elevation. It lies nearly encircled by the Wasatch Mountains on the east, the Oquirrh Mountains on the west, Traverse Ridge to the south and the Great Salt Lake on the northwest, with the peaks of Antelope Island visible.

Every entrance into the valley is extremely narrow and often congested. They include the Point of the Mountain to the south via the Jordan Narrows, a gap in the Traverse Mountains, narrow entrances between the Great Salt Lake and Oquirrh Mountains to the northwest and the Great Salt Lake and the Wasatch Mountains to the north, and several canyons to the east including Parley's Canyon and Emigration Canyon.

Flowing from Utah Lake in Utah Valley in the south, the Jordan River runs north through a gap in the Traverse Mountains, bisecting the Valley before emptying into the Great Salt Lake. The Jordan River, along with numerous mountain streams and reservoirs, provides irrigation water to the rapidly growing Valley.

The geography of the Salt Lake Valley combined with the prevalence of fossil fuel burning vehicles leads to poor air quality in Utah.

All content from Kiddle encyclopedia articles (including the article images and facts) can be freely used under Attribution-ShareAlike license, unless stated otherwise. Cite this article:
Salt Lake Valley Facts for Kids. Kiddle Encyclopedia.