Not to be confused with a different Antelope Island on the border of Arizona and Utah in Lake Powell.

Antelope Island, with an area of 42 square miles (109 km2), is the largest of 10 islands located within the Great Salt Lake, Utah, United States. The island lies in the southeastern portion of the lake, near Salt Lake City and Davis County, and becomes a peninsula when the lake is at extremely low levels.

The first known non-natives to visit the island were John C. Fremont and Kit Carson during exploration of the Great Salt Lake in 1845, who "rode on horseback over salt from the thickness of a wafer to twelve inches" and "were informed by the Indians that there was an abundance of fresh water on it and plenty of antelope". It is said they shot a pronghorn antelope on the island and in gratitude for the meat they named it Antelope Island.

Antelope Island has natural scenic beauty and holds populations of pronghorn, bighorn sheep, American bison, porcupine, badger, coyote, bobcat, and millions of waterfowl. The bison were introduced to the island in 1893, and Antelope Island Bison Herd has proven to be a valuable genetic pool for bison breeding and conservation purposes. The bison do well because much of the island is covered by dry, native grassland.

The geology of Antelope Island consists mostly of alluvial plains with prairie grassland on the north, east and south of the island, along with a mountainous central area of older Precambrian metamorphic and igneous rocks and late Precambrian to Paleozoic sedimentary rocks, covered by a thin layer of Quaternary lake deposits, colluvium and alluvium. The Precambrian deposits on Antelope Island are some of the oldest rocks in the United States, older even than the Precambrian rocks at the bottom of the Grand Canyon. 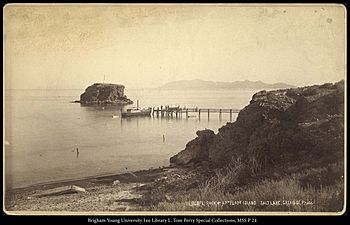 The island is accessible via a 7-mile causeway from Syracuse in Davis County. Access from I-15 is via exit 332, then west along Antelope Drive (SR-108). The island's shore (all but west side of the island) is mostly flat with beaches and plains to the base of the mountains on the island. These steep mountains are visible from most of the northern Wasatch Front, reaching a maximum elevation of 6,596 feet (2,010 m), which is about 2,500 feet (762 m) above the level of the lake.

Antelope Island State Park operates a 10-watt travelers information station on 530 kHz AM. The transmitter is on the south side of the causeway near the island. This station can be heard in Ogden and as far south as Salt Lake City. It carries information about the park's hours of operation, as well as promotes upcoming events that the state park coordinates.

On the east side of the island, 11 miles (18 km) south of the causeway, is the Fielding Garr Ranch. Here is the oldest building in Utah built by European-Americans that is still on its original foundation. It is managed as a historical 'demonstration' ranch. Classes are sometimes taught at the ranch and tours are available. During the warmer parts of the year horses are also available for hourly rental at the ranch, and a tour guide can take riders out to observe the bison. The southern part of the road to the Fielding Garr Ranch is controlled by a gate which is only open from 9 AM to 6 PM on most days.

Antelope Island State Park has approximately 300,000 visitors annually. For the year 2010 it was the 5th most visited State Park in Utah.

Antelope Island is surrounded by the Great Salt Lake. The lake is extremely salty, with salt levels reaching as much as 25% of the lake, by volume, so Great Salt Lake does not support fish, but does support large numbers of brine shrimp which provide food for visiting waterfowl. Because of the high salinity, the island is mostly without readily available fresh water.

Antelope Island is known for its scenic beauty, especially in the northwest quadrant of the island at Buffalo Point and White Rock Bay, where mountains and hills overlook beaches as well as the reflecting waters of the Great Salt Lake and other islands that are visible in the lake. A balloon festival is held yearly, around Labor Day. Birdwatching on Antelope Island is well known. Observing wildlife is also popular on Antelope Island, especially the large numbers of bison which are part of the Antelope Island Bison Herd. Coyotes and antelope are sometimes seen close to the main roads and campsites, and bison often wander across the roads, though the bison are most often found towards the south end of the island near the Fielding Garr Ranch. Other activities on the island include visiting the historical Fielding Garr Ranch, horseback riding and photography. Trail running on the island has devotees, and several trail running races are held on the island each year at distances of 25 kilometres (16 miles), 50 kilometres (31 miles), 50 miles (80 kilometres) and 100 miles (160 kilometres).

Antelope Island has an array of wildlife and is famous for its large bison population, the Antelope Island bison herd. Though the island was named for the pronghorn antelope that John C. Fremont and Kit Carson discovered there when they explored the Great Salt Lake, bison (American buffalo) were later introduced. All of the bison on Antelope Island are plains bison. The Antelope Island bison herd got its start when, "Twelve bison, 4 bulls (males), 4 cows (females) and 4 calves were taken by boat to the island on February 15, 1893 by William Glassman and John Dooly. These twelve animals provided the foundation for what has grown into one of the largest and oldest publicly owned bison herds in the nation." The herd of bison increased quickly in numbers and by the early 20th century, several hundred of them were present on the island.

A silent film produced by Paramount Pictures, The Covered Wagon (1923), was partly filmed on Antelope Island where a scene requiring a buffalo hunt and a buffalo stampede were needed. At the time, the bison herd on Antelope Island was possibly the largest herd of bison in the US. After much effort, about 350 of the animals were herded into a stampede which was then filmed under the direction of James Cruze. The movie is considered by some people to be the first great "Western Epic" and it established some of the clichés that persist in 'Western' movies, such as circling the wagons in time of danger or attacks. During the movie, seven buffalo were shot and killed for the hunting scenes. "Don't grow sentimental over the seven," said Cruze, the director of the film. "The folks out there would like to get rid of the whole herd and they would, but for the sentimental hubbub that is always raised when they talk of rounding out the buffalo. The animals are worthless- there isn't worse meat on earth to eat - and they ruin the whole territory for cattle grazing purposes. So the buffalo remain - sentimental reminders of the America of the past."

Apparently, profit was the principal motive for Mr. Dooly to establish the 'Buffalo Herd' on Antelope Island. By the 1890s the American Bison was extinct over most of its former range and was becoming quite rare. Apparently John Dooly felt that he could ranch the 'buffaloes' and charge people money to hunt them. When keeping the bison for hunting proved economically unfeasible, attempts to ranch them on Antelope Island were terminated. In 1926 a final, large hunt was arranged and the buffalo on the island were hunted and most of them destroyed in one great slaughter. Later a remnant population that escaped the hunt was left alone and it began to increase. Eventually, the State of Utah purchased ownership of the herd which was once again numbering hundreds of individuals. Since that time, the bison have been carefully managed and monitored for health and absence of disease.

Every year, in late October, all the bison on the island are herded towards a central area in a 'Great Buffalo Roundup' and sent briefly into pens where they are examined, weighed and vaccinated and decisions are made on culling and selecting breeding stock. The majority of the bison are then released within a few days, and are again allowed to roam free on the island. The Antelope Island Bison Herd fluctuates between 550 and 700, and is one of the largest publicly owned bison herds in the nation. The reason for the variability of the size of the herd is that the bison produce approximately 150 to 200 calves annually, and since this is prime 'prairie' habitat for bison, with no significant predators, the herd can increase by up to ¼ every year. It is currently felt that 700 is near the maximum preferred carrying capacity for bison on the island, so the excess bison need to be culled. Bison from this island are often sent to other herd locations around North America because of their genetic isolation, some unique genetic markers contained in the population, and because of their disease-free condition. Some bison are also purchased at the pen site in a yearly public auction, and are taken as meat or breeding stock for commercial 'buffalo' farms in other parts of the world.

Antelope Island and the Great Salt Lake attract numerous migrating and nesting birds and nearly 250 different species of birds have been observed on the island.

The two most popular places for bird watching on the island are at the causeway and near the Fielding Garr Ranch. Along the shoreline of the island, mallard, Canada goose, avocets, black-necked stilts, willets, long-billed curlews, sanderlings, American white pelicans, pied-billed grebes, killdeer, great blue herons, snowy egrets, white-faced ibis and many migratory birds can be observed.

All content from Kiddle encyclopedia articles (including the article images and facts) can be freely used under Attribution-ShareAlike license, unless stated otherwise. Cite this article:
Antelope Island Facts for Kids. Kiddle Encyclopedia.