Kids Encyclopedia Facts
This page is about the mountain range in the western United States. For other uses, see Wasatch.
Not to be confused with Wasatch Plateau.

In the language of the native Ute people, Wasatch means "mountain pass" or "low pass over high range." According to William Bright, the mountains were named for a Shoshoni leader who was named with the Shoshoni term wasattsi, meaning "blue heron". 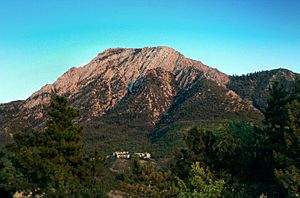 Mount Olympus, a prominent and recognizable mountain visible from much of the Salt Lake Valley, August 2005

Since the earliest days of European settlement, most of Utah's population has chosen to settle along the range's western front, where numerous rivers exit the mountains. For early settlers, the mountains were a vital source of water, timber, and granite. Today, 85% of Utah's population lives within 15 miles (24 km) of the Wasatch Range, mainly in the valleys just to the west. This westside concentration is known as the Wasatch Front and has a population of just over 2,000,000. Salt Lake City lies between the Wasatch Range and the Great Salt Lake. 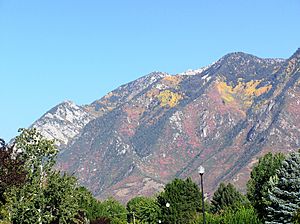 The Wasatch Mountains in the fall, September 2003

The range's highest point — 11,928 feet (3,636 m) — is Mount Nebo, a triple peak rising above Nephi, at the southern end of the range. In some places the mountains rise steeply from the valley's base elevation of 4,330 feet (1,320 m) to over 11,000 feet (3,400 m). Other notable peaks include Mount Timpanogos, a massive peak which looms over northern Utah County and is especially prominent from Pleasant Grove and Orem; Lone Peak, the Twin Peaks, and Mount Olympus, which overlook the Salt Lake Valley; Francis Peak overlooking both Morgan and Davis counties; and Ben Lomond and Mount Ogden, both near Ogden. 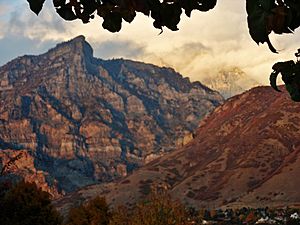 Squaw Mountain over Rock Canyon at sunset as seen from the campus of Brigham Young University in Provo, August 2012.

Topping out below 12,000 feet (3,700 m), Wasatch peaks are not especially high compared to the Rocky Mountains of Colorado or even the Uinta Mountains (the other main portion of the Rocky Mountains in Utah). However, they are sculpted by glaciers, yielding notably rugged, sweeping upland scenery. They also receive heavy falls of snow: more than 500 inches (1,300 cm) per year in some places. This great snowfall, with its runoff, made possible a prosperous urban strip of some 25 cities along nearly 100 miles (160 km) of mountain frontage. The Wasatch Range is home to a high concentration of ski areas, with 11 stretching from Sundance in northeastern Utah County to Powder Mountain and Wolf Mountain northeast of Ogden. There is also one ski resort in the Bear River Mountains (Beaver Mountain). Park City alone is bordered by two ski resorts. Due to the low relative humidity in wintertime, along with the added lake-effect from the Great Salt Lake, the snow has a dry, powdery texture which most of the local ski resorts market as "the Greatest Snow on Earth". The snow and nearby ski resorts helped Salt Lake City gain the right to host the 2002 Winter Olympics.

Several of the canyons in the Lone Peak area, most notably Little Cottonwood Canyon, have a number of high-quality granite outcroppings, and make up a popular climbing area such as the Pfeifferhorn. Farther north, Big Cottonwood Canyon features tricky climbing on quartzite.

The densely vegetated narrow canyons of the Wasatch Range, such as Big Cottonwood Canyon and Little Cottonwood Canyon, are heavily visited; on September 25, 2005, 1,200 automobiles entered Little Cottonwood in an hour. The canyons sit within 24 miles (39 km) of downtown Salt Lake City and the year-round paved roadways can reach 5,000 feet (1,500 m) higher in elevation above the city within a short distance. Dirt roads readily drivable in passenger cars with moderate clearance stretch up from Park City, Heber, and Big Cottonwood Canyon. These reach about 10,000 feet (3,000 m) above sea level and provide long-range high country views.

Wasatch Plateau geologic cross section, where Kmt and Kmf are the Tununk and Ferron Sandstone members of the Mancos Shale, Km. Kmv is the Mesaverde Group and Tkn is the North Horn Formation 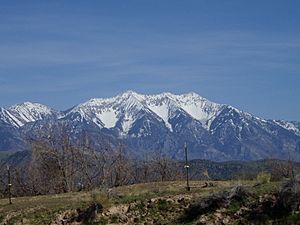 West side of Mount Nebo, the highest peak in the Wasatch Range.

Mount Nebo, the highest peak of the Wasatch, is at the southern edge of the range. The Colorado Plateau comes to its northwest corner here as it meets the southern end of the Rocky Mountains. Immediately west of these two, the Great Basin, which is the northern region of the Basin and Range Province, begins and stretches westward across western Utah and Nevada until it reaches the Sierra Nevada near the Nevada/California border. The range is punctuated by a series of geologic faults, chief among them the Wasatch Fault. These faults also formed the Timpanogos Cave.

The northern Wasatch Range is punctuated by a series of mountain valleys. While the western side of the range drops sharply to the floors of the Wasatch Front valleys, the eastern side of the range is gentler, allowing for the construction of several ski resorts. The Cottonwoods, a particularly rugged and dense area just east of the Salt Lake Valley, shelters small mountain coves that harbor four world-famous ski resorts (Alta, Brighton, Solitude, and Snowbird). The eastern slopes of the Cottonwoods drop to the Snyderville Basin, which contains Park City and its two ski resorts (Park City Mountain Resort and Deer Valley). Much of the eastern side of the range from north of Salt Lake City to the Bear River Mountains is especially gentle in comparison to the rest of the range. The range widens east of Ogden, sheltering a high mountain valley known as the Ogden Valley. Three more ski resorts lie here, as well as several small towns (such as Huntsville, Liberty, and Eden). 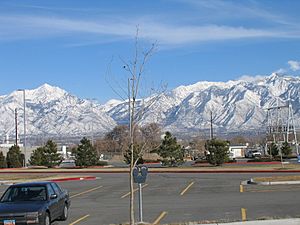 North of this, the Wellsville Mountains branch off from the northwest of the range, continuing a line of mountains paralleling the I‑15 corridor. This range is exceptionally thin and steep. However, US‑89/US‑91 is maintained as a four-lane highway through the range at Wellsville Canyon east of Brigham City. Cache Valley, created by the Bear River, is flanked on the west by the Wellsville Mountains and the east by the much denser and higher Bear River Mountains. The northwestern border of Cache Valley is flanked by the Bannock Range in Idaho. The two highest peaks in this area are Mount Naomi and Mount Logan, each just under 10,000 feet (3,000 m). 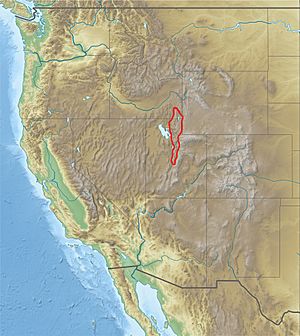 The western United States with the Wasatch Range outlined in red.

The southeastern portion of the range across Wasatch County transforms into the relatively flat, windswept Wasatch Plateau at an elevation of about 8,500 feet (2,600 m) to 9,500 feet (2,900 m). At its southeastern edge, just north of Helper, it runs into the Book Cliffs. Further north, the Heber Valley and Weber River Valley separate the Wasatch Range from the Uinta Mountains, while the Bear River Valley and Bear Lake Valley separate it from lower mountain ranges that mark the western edge of the Green River Basin.

The Wasatch Range is traversed by just seven highways, along with several rugged mountain roads and unpaved trails. The most prominent are I‑80 through Parley's Canyon east of Salt Lake City, and I‑84 through Weber Canyon southeast of Ogden. They meet near the ghost town of Echo on the eastern slopes of the range and continue northeast as I‑80. Other highways through the range include US‑6/US‑89 through Spanish Fork Canyon, US‑189 through Provo Canyon, Utah State Route 39 extending east from Huntsville (a route which is closed in winter), US‑89/US‑91 through Logan Canyon, and along Idaho State Highway 36 near the northern end of the range.

The Denver and Rio Grande Western Railroad had a line through the Wasatch Range, via Soldier Summit Pass and Spanish Fork Canyon. Now operated by the Union Pacific Railroad, the line is used by freight trains and Amtrak's California Zephyr.

The Wasatch Range is part of the Wasatch and Uinta Mountains Level 3 Ecoregion, a temperate coniferous forest. Common trees include Douglas fir (Pseudotsuga menziesii), subalpine fir (Abies bifolia), Engelmann spruce (Picea engelmannii), Colorado blue spruce (Picea pungens), and quaking aspen (Populus tremuloides). Gambel oak (Quercus gambelii) is common on the foothills of the range from just south of Brigham City in the north, to the southern extension of the Wasatch Range. It is not found in the northern portion of the Range. Ponderosa pine (Pinus ponderosa), while abundant elsewhere in Utah is not common in this mountain range, except in plantations in Big Cottonwood Canyon southeast of Salt Lake City and in Logan Canyon, east of Logan. Some individual trees have been found in remote areas of the Wasatch Range that appear to be relic individuals from past populations.

The Wasatch Range is home to several plants that occur nowhere other than in this area. Several of these are very rare and restricted to narrow geological formations, while others are more widely distributed throughout the area. Some of the less rare endemics include five-petal cliffbush (Jamesia americana var. macrocalyx), Sierra fumewort (Corydalis caseana ssp. brachycarpa), and Utah angelica (Angelica wheeleri). 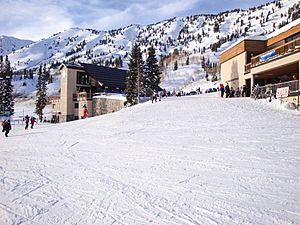 Besides ski resorts, the Wasatch range has hundreds of miles of mountain biking and hiking trails winding through the canyons and alpine valleys of the Wasatch Range. These offer back country access close to a large metropolitan area. There is rock climbing and mountaineering on the towering limestone, granite, and quartzite peaks and in many of the surrounding canyons.

Alpine lakes and streams offer somewhat over-worked fishing opportunities. The Wasatch Mountain Club has regular activities. The Utah Native Plant Society conducts regular walks from spring until fall along the foothills of the central Wasatch Front and in adjoining canyons as the seasons progress. Many wildflowers bloom in the late summer in Albion Basin at the top of Little Cottonwood Canyon.

The Salt Lake Valley urban area, a major portion of the Wasatch Front. The Wasatch Mountains extend both north and south of the valley.

All content from Kiddle encyclopedia articles (including the article images and facts) can be freely used under Attribution-ShareAlike license, unless stated otherwise. Cite this article:
Wasatch Range Facts for Kids. Kiddle Encyclopedia.