Cache Valley is a valley of northern Utah and southeast Idaho, United States, that includes the Logan metropolitan area. The valley was used by 19th century mountain men and was the site of the 1863 Bear River Massacre. The name, Cache Valley is often used synonymously to describe the Logan Metropolitan Area, one of the fastest growing metro areas in the US per capita — both in terms of economic GDP and population. 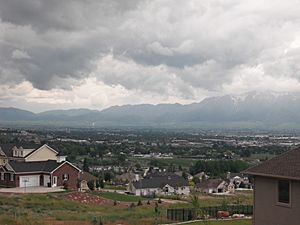 Alongside habitation by the Shoshone and other indigenous peoples, European explorer Michel Bourdon discovered Cache Valley c.1818 during a MacKenzie fur expedition. The valley was subsequently used for the second of the annual gatherings of mountain men. Many of the trappers who worked in the valley came from the Hudson's Bay Company, the Northwest Fur Company, and the Rocky Mountain Fur Company. The name "Cache Valley" was derived by the fur trappers who hid their trading goods in caches in that region. The use of caches was a method used by fur traders to protect their goods from theft and damage.

Mormon William Gardner became the first Anglo-American permanent settler in 1852. Prior to the Mormon selection of the Salt Lake Valley, Jim Bridger had recommended Cache Valley due to its relative abundance of fresh water. A Mormon settler group led by Peter Maughan arrived via Box Elder Canyon (commonly referred to as Sardine Canyon) in July 1856 and additional settlers arrived on September 15.

Early Anglo-American settlers of Cache Valley were able to defend themselves from their perceived threat of Native Americans by creating the Cache Valley Militia. Men from the various towns in Cache Valley nicknamed "minute men" volunteered to drill, serve as watchmen, and to ride to the aid of other communities at the news of attacks and skirmishes.

On January 29, 1863, an expedition from Camp Douglas, Utah to Cache Valley, the United States Army at the request of Cache Valley settlers attacked a Shoshone village in the early morning at the confluence of the Bear River and Beaver Creek (now Battle Creek) in what became known as the Bear River Massacre. Officially, numbers of Shoshone dead have varied, but estimates settle around 400-500 dead, including hundreds of women and children. This is still the largest massacre of Native American peoples by the United States government today. 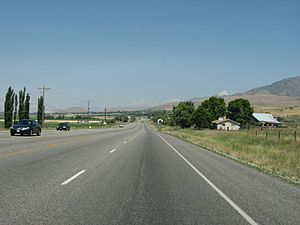 Looking north on US‑91 toward Richmond, Utah, August 2007

There are two airports in the valley, the Logan-Cache Airport and Preston Airport. Neither airport provides commercial service, however Salt Lake City International Airport is within driving distance (less than 2 hours).

All content from Kiddle encyclopedia articles (including the article images and facts) can be freely used under Attribution-ShareAlike license, unless stated otherwise. Cite this article:
Cache Valley Facts for Kids. Kiddle Encyclopedia.