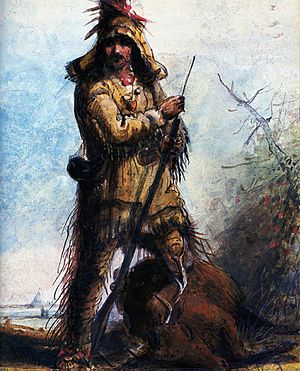 A mountain man was an explorer, trailblazer, and animal trapper in western North America. They flourished between 1810 and 1880. They were well known throughout the Rocky Mountains region. Famous mountain men include Jim Bridger, Kit Carson, and Jedediah Smith. By the mid 1800s the fur trade was no longer profitable. Furs were no longer popular in European fashion. Many of the mountain men settled into jobs as Army Scouts, wagon train guides and settlers through the lands which they had helped open up. Others, like William Sublette, opened up fort-trading posts along the Oregon Trail for the remaining fur traders and settlers heading west.

All content from Kiddle encyclopedia articles (including the article images and facts) can be freely used under Attribution-ShareAlike license, unless stated otherwise. Cite this article:
Mountain man Facts for Kids. Kiddle Encyclopedia.