The Oregon Trail was one of the key overland migration routes on which pioneers traveled across the North American continent in wagons in order to settle new parts of the United States of America during the 19th century. The Oregon Trail helped the United States implement its cultural goal of Manifest Destiny, that is to build a great nation spanning the North American continent. The Oregon Trail spanned over half the continent as the wagon trail proceeded over 2,000 miles west through territories and land later to become six U.S. states (Missouri, Kansas, Nebraska, Wyoming, Idaho, and Oregon). Between 1841 and 1869, the Oregon Trail delivered settlers to the Northwest and West Coast areas of what is now the United States. Once the first transcontinental railroad was completed in 1869, this trail was no longer used by long distance travelers.

The first land route across the continent to be well-mapped was that taken by Lewis and Clark from 1804 to 1805. They believed they had found a practical route to the west coast. However, the pass through the Rocky Mountains they took, Lolo Pass, turned out to be too difficult for wagons to pass. In 1810, John Jacob Astor outfitted an expedition to find an overland supply route for establishing a fur trading post at the mouth of the Columbia River. The expedition was a failure, but on the way back, the party discovered a wide, low pass through the Rockies: South Pass.

Westward expansion did not begin immediately, however. Reports from expeditions in 1806 by Lt. Zebulon Pike and in 1819 by Maj. Steven Long described the Great Plains as "unfit for human habitation" and "the Great American Desert". These descriptions ignored the fact that the land could be fertile if irrigated with ground water (the Great Plains are a major farming area today). Regardless, the images they conjured up of a wasteland of sand and cactus discouraged migration for some time. 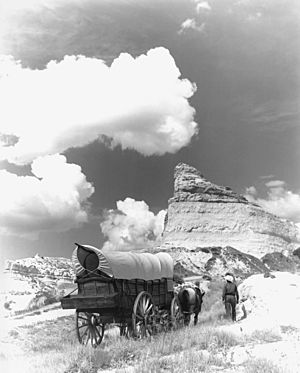 The route of the Oregon Trail began to be scouted out as early as 1823 by fur traders and explorers. The trail began to be regularly used by fur traders, missionaries, and military expeditions during the 1830s. At the same time, small groups of individuals and the occasional family attempted to follow the trail and some succeeded in arriving at Fort Vancouver in Washington. On May 16, 1842 the first organized wagon train on the Oregon Trail set out from Elm Grove, Missouri, with more than 100 pioneers. (Members of the party later disagreed over the size of the party, one stating 160 adults and children were in the party, while another counted only 105.) John McLoughlin, head of Fort Vancouver, saw no reason for able-bodied people to starve and therefore offered the American settlers food and farming equipment on credit. The following year, an estimated 800 immigrants arrived in the Willamette Valley. Hundreds of thousands more would follow, especially after gold was discovered in California in 1849. The trail was still in use during the Civil War, but traffic declined after 1869 when the transcontinental railroad was completed. The trail continued to be used into the 1890s and modern highways eventually paralleled large portions of the trail.

Other migration paths for early settlers prior to the establishment of the transcontinental railroads involved taking passage on a ship rounding the Cape Horn of South America or to the Isthmus (now Panama) between North and South America. There, an arduous mule trek through hazardous swamps and rain forests awaited the traveler. A ship was typically then taken to San Francisco, California. 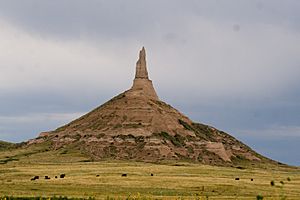 Many rock formations became famous landmarks that Oregon Trail pioneers used to navigate as well as leave messages for pioneers following behind them. The first landmarks the pioneers encountered were in Western Nebraska, such as Court House Rock, Chimney Rock, and Scotts Bluff (where wagon ruts can still be seen to this day). Further west, in Wyoming, you can still read the names that these pioneers carved into a landmark bluff called Register Cliff. 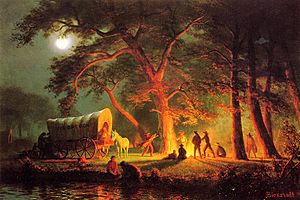 The Oregon Trail was too long and arduous for the standard Conestoga wagons used in the Eastern U.S. at that time for most freight transport. These big wagons had a reputation for killing their oxen teams approximately two thirds along the trail and leaving their unfortunate owners stranded in desolate, isolated territory. The only solution was to abandon all belongings and traipse onward with the supplies and tools that could be carried or dragged. In one case in 1846 the Donner Party was stranded in the Sierra Nevada in November and had to resort to cannibalism to survive.

This led to the rapid development of the prairie schooner. This wagon was approximately half the size of the big Conestogas but was also manufactured in quantity by the Conestoga Brothers. It was designed for the Oregon Trail's conditions and was a marvel of engineering in its time.

All content from Kiddle encyclopedia articles (including the article images and facts) can be freely used under Attribution-ShareAlike license, unless stated otherwise. Cite this article:
Oregon Trail Facts for Kids. Kiddle Encyclopedia.