The Dalles, Oregon facts for kids

Kids Encyclopedia Facts
This page is about the city in Oregon. For the nearby geological formation, see Celilo Falls. For other uses, see Dalles.
Not to be confused with the town of Dallas, Oregon.

The site of what is now the city of The Dalles was a major Indian trading center for at least 10,000 years. The general area is one of the continent's most significant archaeological regions. Lewis and Clark camped near Mill Creek on October 25–27, 1805, and recorded the Indian name for the creek as Quenett.

The name of the city comes from the French word dalle (meaning either "sluice" (akin to English "dale" and German T[h]al, "valley") or "flagstone" and referring to the columnar basalt rocks carved by the river, in voyageur French used to refer to rapids), which was used by the French-Canadian employees of the North West Company to refer to the rapids of the Columbia River between the present-day city and Celilo Falls. Also in the same area was the Petite Dalles or Little Dalles, or Short Narrows.

The first use of the name Dalles, according to Oregon Geographic Names, appears in fur trader Gabriel Franchère's Narrative, on April 12, 1814, referring to the long series of major rapids in the river. Starting in the 1810s, Americans and Europeans passed by what became The Dalles, active in the North American fur trade as employees of either the American Pacific Fur Company (PFC) or the Canadian North West Company (NWC). Men like NWC officer David Thompson voyaged both down and up the Columbia, traveling through Celilo Falls. The War of 1812 led to the 1813 liquidation of the PFC, its properties like Fort Astoria sold to the North West Company.

Early illustration of The Dalles, attributed to Joseph Drayton

In 1821 the North West Company was absorbed by the giant London-based Hudson's Bay Company (HBC). Fort Vancouver, built in 1824, replaced Fort Astoria as the regional fur trade headquarters. The HBC's trading network made extensive use of the Columbia River. The rapids of the Columbia River at The Dalles was the largest and longest of the four "great portages", where fur trading boats had to unload and transship their cargoes. Sometimes, during high water, boats traveling downriver would "shoot the rapids" instead of portaging, although the practice was dangerous and many people died as a result over the years.

The Umatilla House hotel circa 1880 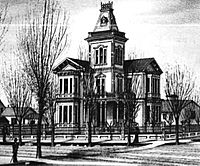 In 1838 a branch of Jason Lee's Methodist Mission was established at Celilo Falls, named the Wascopam Mission, after the native Wasco Indians. In 1850 the U.S. Army founded a small post at the site of the old mission, being eventually named Fort Dalles. Fort Dalles became the nucleus of the town of The Dalles, which began to develop along the waterfront. In 1855, at the end of the Cayuse War, the Indians living near The Dalles were forceably relocated by the U.S. Army to the Warm Springs Indian Reservation.

In the early 1840s American settlers began to arrive in significant numbers, traveling overland via the Oregon Trail. The trail ended at The Dalles. It was not possible to take wagons farther west due to steep cliffs that fell straight into the Columbia River. Until the construction of the Barlow Road in 1846, the only way to reach Fort Vancouver and the Willamette Valley was by rafting down the river from The Dalles.

A post office was established within the boundaries of the current city in 1851, and The Dalles was incorporated as a city in 1857. It has been the major commercial center between Portland and Pendleton since. The city was originally named just "Dalles". In 1853 it was changed to "Wascopum," then, in 1860, to "The Dalles".

In 1864, the U.S. Congress appropriated money to build a U.S. mint in The Dalles that was to use gold from Canyon City for coinage. The supply of gold from Canyon City began to dwindle, however, and other problems, such as cost over-runs, workers leaving to work the gold fields, and flooding from the Columbia River, also contributed to the project running two years behind schedule and led eventually to its demise. In 1870, the State of Oregon received the property from the U.S. Government and the building was put to other uses. The mint is now home to Freebridge Brewing. 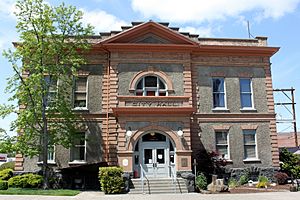 In 1924, Bobbie the Wonder Dog stopped briefly in The Dalles while on his 2,600 mile (4,200 km) journey home by foot from Indiana to Silverton, Oregon. Emaciated and tired, he was aided by members of the community before moving westward through the Columbia Gorge.

Construction of The Dalles Dam in 1957 submerged the Long Narrows and Celilo Falls.

In 1963, Ken Kesey's novel One Flew Over the Cuckoo's Nest was published featuring the narrator, Chief, who is from The Dalles.

In 1970, the Bonneville Power Administration opened the Celilo Converter Station near the northern terminus of the Pacific DC Intertie which sends 3,100 megawatts of electricity to Los Angeles.

In 1982 a curly-coated kitten was born on a farm in The Dalles owned by Linda and Dick Koehl. The Koehls used this kitten and her offspring to develop a new breed of cat called the LaPerm, which went on to become a popular, established, championship pedigree cat breed around the world.

In 1984 The Dalles was the site of the first and single largest bioterrorism attack in United States history.

In 1986, Penalty Phase, a film starring Peter Strauss and Melissa Gilbert, was filmed in and around The Dalles.

The Dalles and the Columbia River showing surrounding landscape

The Dalles is usually classified as a cool semiarid (Köppen BSk) climate region. However it has some characteristics of the midlatitude oceanic climate that dominates west of the Cascade Mountains, combined with seasonal precipitation patterns very similar to those found in Mediterranean climates. The city's location in the eastern Columbia Gorge results in there being numerous microclimates within a few miles of town. Winters are significantly wetter, and summers significantly cooler, to the immediate west while upland locations to the south are significantly cooler in all seasons. The generally warm and dry summers near town make it the ideal climate for the many Bing cherry orchards in the area.

The summer season runs from mid-June through early September and is quite warm by Pacific Northwest standards; however, summer weather often oscillates between intense heat waves and much cooler and windier periods. Except for the occasional sporadic thunderstorm, there is almost no summer rainfall.

From late September through early November, the area experiences an abrupt autumn during which normal temperatures drop very rapidly and cloudy, wet weather quickly picks up. Prior to the sudden onset of the rainy season in mid- to late fall, there are often days with a very wide disparity between daytime and nighttime temperatures, sometimes exceeding 20 C / 36 F. There is far less wind in the fall than in spring and early summer, though passing frontal systems can still bring quick bouts of strong wind.

Winter is the wet season in The Dalles. Despite the rain shadow effect created by the Cascades, there is still enough precipitation most years to support relatively high soil moisture levels for most of the winter. This is a very similar pattern to what happens in classic Mediterranean climates - except that the temperatures are significantly colder. The area receives measured snowfall virtually every year, but the snow totals fluctuate dramatically from one year to the next; some seasons see only one or two brief light snow events while others get major snowstorms and cumulative totals of 50 cm (20 in.) or more. Average winter temperatures are only about 2–3 C (3–5 F) degrees colder than in cities such as Portland and Seattle, and temperatures below −20 C (−4 F) are very rare, but not unheard of. As in the summer, winter temperatures can vary tremendously from one day to the next: during arctic air events the daytime high temperatures will generally be well below 0C / 32F, while a strong subtropical push can raise temperatures into the 50s and low 60s F, even in January. It is quite common for relatively cold air to become trapped at low elevations due to an inversion above; depending on the temperature of the surface airmass, depth of the inversion layer, and temperatures above the inversion layer, this can result in snow, sleet, freezing rain or a very cold liquid rain.

Springtime conditions generally run from late February through early June, during which time the overall trend gradually becomes warmer and drier and the landscape briefly turns lush and green. This is the windiest season of all, with a powerful west wind on most afternoons. During stormy periods in spring it is usually cloudy and cool while most sunny and calm days become intensely warm, especially from April onward. Spring temperatures often vary more from one week to the next than they do from one month to the next.

The growing season is roughly 200 days in a typical year, generally running from early April through most of October. However spring frost dates can range from mid-March to early May, and fall frost dates from late September to mid-November. 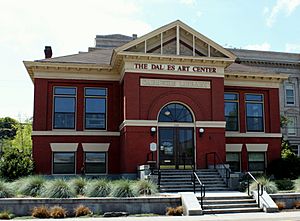 The Northwest Cherry Festival is held in The Dalles in April.

In 1984, The Dalles was the scene of a bioterrorist incident launched by members of the Rajneesh Movement in an attempt to gain control of the local government of Wasco County. Salmonella placed in ten restaurants resulted in 751 cases of Salmonellosis. It was the first known bioterrorism attack of the 20th century in the United States. The circumstances of the attack are documented in an American Medical Association article (JAMA Vol 278, No 5, page 389, 6Aug1997).

The Dalles has one sister city:

In 2006, Google began building a major data center, known locally as Project 02, along the Columbia River in The Dalles, using the area's reliable hydroelectric power and the underutilized fiber optic capacity of the area. The new complex includes two buildings, each approximately the size of a football field, and two cooling plants, each four stories high. The project promised hundreds of jobs in the area, mainly in construction, with an additional 200 permanent positions expected later in 2006 although as of 2013 Google employed only 150 combined company employees and contractors in The Dalles.

As of 2012, the top 15 employers in The Dalles according to the Mid-Columbia Economic Development District report on "Largest Employers in Wasco County" are:

The Dalles is home to Oregon School District 21. Originally 2 school districts; District 9 in the Chenoweth area and District 12 which included much of The Dalles.

St Mary's Academy is a k-8 school affiliated with the Catholic Church in The Dalles.

Columbia Lutheran School is a Christian elementary school of the Evangelical Lutheran Synod in The Dalles.

The Dalles is also home to the main campus of Columbia Gorge Community College which began in 1977 as Wasco Area Education Service District. It is a leading institution in renewable energy technology education and training.

All content from Kiddle encyclopedia articles (including the article images and facts) can be freely used under Attribution-ShareAlike license, unless stated otherwise. Cite this article:
The Dalles, Oregon Facts for Kids. Kiddle Encyclopedia.