Pendleton is a city and the county seat of Umatilla County, Oregon. The population was 17,107 at the time of the 2020 census, which includes approximately 1,600 people who are incarcerated at Eastern Oregon Correctional Institution.

Pendleton is the smaller of the two principal cities of the Hermiston–Pendleton Micropolitan Statistical Area. This micropolitan area covers Morrow and Umatilla counties and had a combined population of 92,261 at the 2020 census.

A European-American commercial center began to develop here in 1851, when Dr. William C. McKay established a trading post at the mouth of McKay Creek. A United States Post Office named Marshall (for the owner, and sometime gambler, of another local store) was established April 21, 1865, and later renamed Pendleton. The city was incorporated by the Oregon Legislative Assembly on October 25, 1880.

By 1900, Pendleton had a population of 4,406 and was the fourth-largest city in Oregon. The Pendleton Woolen Mills and Pendleton Round Up became features of the city captured in early paintings by Walter S. Bowman. Like many cities in Eastern Oregon, where thousands of Chinese immigrant workers built the transcontinental railroad, it had a flourishing Chinatown that developed as the workers settled here. The sector is supposed to have been underlain by a network of tunnels, which are now a tourist attraction. The authenticity as a Chinese tunnel system has been questioned.

The town is the cultural center of Eastern Oregon. Pendleton's "Old town" is listed as a Historic District on the National Register of Historic Places.

The Confederated Tribes of the Umatilla Indian Reservation (CTUIR) have their property nearby. They have established the Wild Horse Casino and golf course on the reservation to generate revenue for development and welfare. They have also built the Tamástslikt Cultural Institute, for education and interpretation of their cultures.

The city was built on both sides of the Umatilla River, which has periodically flooded and caused some damage. In the beginning, the river was vital as a transportation and trading route for settlers, as well as a water and power source. It connected the city to the Columbia River.

Pendleton has a semi-arid climate (Köppen BSk) with short, cool winters and hot summers. Pendleton had the highest temperature recorded in Oregon at 119 °F (48 °C) on August 10, 1898. 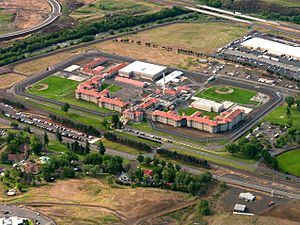 The EOCI prison is one of the largest employers in Pendleton.

In addition to the woolen mills, Pendleton is also famous for its annual rodeo, the Pendleton Round-Up. First held in 1910, it is part of the Professional Rodeo Cowboys Association (PRCA)-sanctioned rodeo circuit. It is among the top ten PRCA venues in terms of prize money.

The Festival of Trees is held in early December each year. It is a fundraising event produced by the St. Anthony Hospital Foundation. 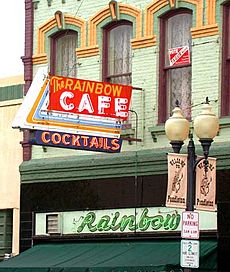 Local arts institutions include the Pendleton Center for the Arts (in the town's old Carnegie Library building) and Crow's Shadow Institute of the Arts on the nearby Umatilla Indian Reservation.

The Pendleton Farmers' Market operates on Friday evenings from May through October on South Main Street. Pendleton Underground Tours which features the history of Pendleton and a tour through the underground tunnels. It is open year-round.

The city hosts the annual Oregon School Activities Association 2A basketball tournament at the Pendleton Convention Center. Eight teams of boys and eight of girls compete for their respective championships during a four-day tournament. Civic leaders regard the influx of family and other fans the second-most important boost to the local economy, behind the Round-Up. Total attendance at the tournament in 2010 exceeded 13,000.

Pendleton lies along the Union Pacific Railroad (UP), constructed originally through the area in the 1880s by the Oregon Railway and Navigation Company (OR&N). In 1880, the OR&N began construction of a rail line from Portland through the Columbia Gorge to eastern Oregon. It reached Umatilla and Wallula in 1881, Pendleton in 1882, and then La Grande, Baker City, and Huntington, where by 1884 it met the UP line from Utah. Since Pendleton was also connected by rail to the Northern Pacific line at Wallula and Walla Walla, by 1885 it was a stop on two transcontinental lines. The UP absorbed the OR&N line in 1889.

Between 1977 and 1997, the city was a regular stop along the former route of Amtrak's Pioneer between Chicago and Seattle via Salt Lake City and Portland.

Regional public aviation service is through Eastern Oregon Regional Airport, 3 miles (5 km) outside Pendleton. The airport is owned by the City of Pendleton. Boutique Air will offer daily flights between Pendleton and Portland beginning late 2016.

Pendleton has a sister city relationship with Minamisoma, Japan. Minamisoma is 16 miles (26 km) north of the Fukushima Daiichi Nuclear Power Plant damaged by an earthquake and tsunami in 2011. Since then, Japanese exchange students from Minamisoma have continued visiting Pendleton, but students from Pendleton have stopped going to Minamisoma because of concerns about radiation. 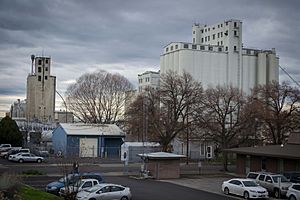 Pendleton Woolen Mills is a maker of wool blankets, shirts, and an assortment of other woolen goods. Founded in 1909 by Clarence, Roy and Chauncey Bishop, the company built upon earlier businesses related to the many sheep ranches in the region. A wool-scouring plant opened in Pendleton in 1893 to wash raw wool for shipping. In 1895, the scouring mill was converted into a mill that made wool blankets and robes for Native Americans. Both businesses failed to survive, but the Bishops, with the help of a local bond issue, enlarged the mill and improved its efficiency. They developed a successful line of garments and blankets with "vivid colors and intricate patterns."

St. Anthony Hospital in Pendleton is a 25-bed medical center.

Eastern Oregon Correctional Institution (EOCI) in Pendleton is the only place in Oregon where inmates make "Prison Blues" denim clothing. The prison also operates a commercial laundry serving customers that include EOCI, the Snake River Correctional Institution, Pendleton High School, a local flour mill, and other entities. In addition, some EOCI inmates work as clerks or have jobs in food service or maintenance.

All content from Kiddle encyclopedia articles (including the article images and facts) can be freely used under Attribution-ShareAlike license, unless stated otherwise. Cite this article:
Pendleton, Oregon Facts for Kids. Kiddle Encyclopedia.