Umatilla County /ˌjuːməˈtɪlə/ is a county located in the U.S. state of Oregon. As of the 2010 census, the population was 75,889. The county seat is Pendleton, but the largest city is Hermiston. The county is named for the Umatilla River.

Umatilla County is part of the Hermiston-Pendleton, OR Micropolitan Statistical Area. It is included in the eight-county definition of Eastern Oregon.

Umatilla County was created on September 27, 1862, out of a portion of Wasco County. Adjustments were made to the county's boundaries following the creation of Grant, Morrow, Union, and Wallowa Counties. This legislative act also designated Marshall Station as the temporary county seat. An 1865 election selected Umatilla City, now known as Umatilla, as the county seat. With the development of wheat farming, population shifted to the north and east parts of the county, and a subsequent election in 1868 moved the county seat again to Pendleton.

The Umatilla Indian Reservation was established by the Treaty of Walla Walla in 1855. The Umatillas, Walla Wallas, and Cayuse tribes were resettled there, and is located immediately southeast of Pendleton.

EZ Wireless of Hermiston officially opened on February 4, 2004, one of the largest known Wi-Fi wide area networks in the United States, covering parts of Umatilla County, Morrow County and Benton County, Washington. Although created to facilitate communications among local police, firemen and EMT workers who immediately respond to possible accidents or terrorist attacks on the Umatilla Chemical Depot, where the U.S. Army maintained a national arsenal of nerve gas, the network can be accessed in some places by the public for free. 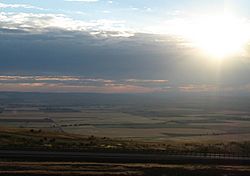 I-84 eastbound and McKay Reservoir in Umatilla County 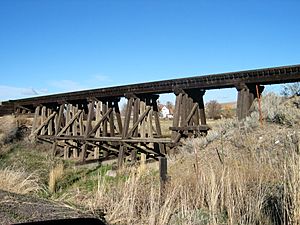 Trestle seen off Sparks Station Rd at Pendleton Country Club, opposite of the McKay Reservoir, Pendleton, Oregon. Transportation linkages in Umatilla are one of the county's major advantages. 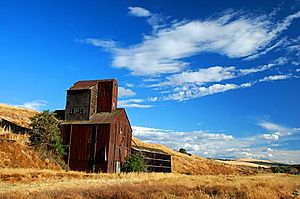 Umatilla County is generally divided into three distinct economic and cultural areas, which are the "West-End," the Pendleton-area, and the Milton-Freewater-area. Although each of these communities shares some economic ties, the distance between each creates three very distinct communities. The West-End includes the communities of Hermiston, Umatilla, Stanfield, and Echo. The Pendleton-area includes Pendleton, as well as Pilot Rock, Adams, and Athena. The Milton-Freewater-area is largely tied to the Walla Walla, Washington area, and is considered a part of the Walla Walla Metropolitan Planning Organization. The similarities between the areas has created a long-standing rivalry, particularly between the West-End and the Pendleton-area, with regard to economic opportunity and public resources. The West-End, led by Hermiston as its largest city, is now nearly twice the size of the Pendleton area, and is projected to be nearly three times the size of the Pendleton area by the year 2035.

All content from Kiddle encyclopedia articles (including the article images and facts) can be freely used under Attribution-ShareAlike license, unless stated otherwise. Cite this article:
Umatilla County, Oregon Facts for Kids. Kiddle Encyclopedia.