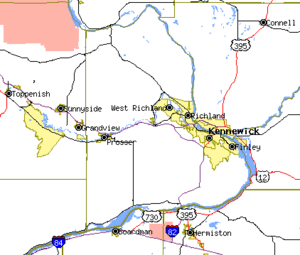 Benton County is a county in the south-central portion of the U.S. state of Washington. As of the 2010 census, its population was 175,177. The county seat is Prosser, and its largest city is Kennewick. The Columbia River demarcates the county's north, south, and east boundaries.

Benton County was created from what were then larger versions of Klickitat County and Yakima County on March 8, 1905, and was named after Missouri statesman Thomas Hart Benton.

The Tri-City area’s favorable climate, generally lower costs of living, and central location within a four hour’s drive of the Seattle, Portland, Boise, and Spokane metropolitan areas has made it a popular destination for conferences, sports tournaments, festivals, agri-tourism, and other attractions that are aggressively marketed by the community.

A private golf and country club, Meadow Springs, is also located in Richland.

The Tri-City Americans are a major junior hockey team and are a founding member of the Western Hockey League and play at the Toyota Center. The Americans began as the Calgary Buffaloes in 1966, and after stints in Billings, Nanaimo, and New Westminster, moved to the Tri-Cities for the 1988–89 season where they were rebranded as the “Americans”. Players are 16–20 years old and are generally considered to have amateur status, though they do receive nominal compensation and the organization is operated as a for-profit business.

Like many Western counties, Benton County is home to considerable public lands acreage totaling about one-third of the county’s total land area. The most significant holding is the United States Department of Energy’s Hanford Site, most of which has restricted public access. However, Hanford does have a strong “nuclear tourism” element and certain Site facilities, such as the B Reactor, are a major attraction for history and engineering buffs. Part of the Hanford Site acreage is also part of the Hanford Reach National Monument, which was established in 2000 by presidential proclamation. Like with most of the rest of Hanford, most of the National Monument within Benton County is restricted from general public use.

Other federal land holdings in the county include small clusters of Bureau of Land Management, notably an aggregation along the Horse Heaven Hills south of Benton City that is popular with hikers; Fish and Wildlife Service-owned islands and shorelands that are parts of the Umatilla and McNary National Wildlife Refugues; and Army Corps of Engineers properties along the Columbia River, most of which are managed for habitat and recreation by the County and cities.

State-owned public lands are minimal in Benton County, with the Department of Fish and Wildlife’s Rattlesnake Slope Wildlife Recreation Area north of Benton City being the most significant and a draw for hikers and equestrians.

Benton County and the cities also own numerous parklands and open spaces, most notable the Badger Mountain Centennial Preserve, a hiking destination managed by the County located south of Richland which draws over 200,000 visits per year.

Kiona Vineyard in the Red Mountain AVA looking northwest toward Rattlesnake Mountain. Two varieties of grapes are evident on a crisp autumn day.

The area of south-central Washington occupied by Benton County has been known primarily as an agricultural hub since its settlement by white Americans. The rise of viticulture has had a profound impact on the agricultural and tourism industries over the past two decades, and has in many ways reshaped the reputation of the region.

The Yakima Valley AVA, part of which is located in Benton County, was the first American Viticultural Area established within Washington State, gaining the recognition in 1983. As the Washington wine industry began to focus more on terroir, three sub-appellations have been created for areas within the Yakima Valley AVA that demonstrate unique microclimates and soil conditions which crafted different wines from their neighboring areas. The Red Mountain AVA, which lies in its entirety on Benton County, was created in 2001. The county also includes part of the Horse Heaven Hills AVA which is part of the larger Columbia Valley AVA.

Two public college branch campuses are located in Benton County, each in Richland:

All content from Kiddle encyclopedia articles (including the article images and facts) can be freely used under Attribution-ShareAlike license, unless stated otherwise. Cite this article:
Benton County, Washington Facts for Kids. Kiddle Encyclopedia.