The nearest commercial airport is the Tri-Cities Airport in Pasco, a regional commercial and private airport.

The name "Kennewick" is believed to be a native word meaning "grassy place." It has also been called "winter paradise," mostly because of the mild winters in the area. In the past, Kennewick has also been known by other names. Legend has it that the strangest was "Tehe," which has been attributed to the reaction from a native girl's laughter when asked the name of the region.

During the 1880s, steamboats and railroads connected what would become known as Kennewick to the other settlements along the Columbia River. In 1887, a temporary railroad bridge was constructed by the Northern Pacific Railroad connecting Kennewick and Pasco. That bridge could not endure the winter ice on the Columbia and was partially swept away in the first winter. A new, more permanent bridge was built in its place in 1888. Until this time, rail freight from Minneapolis to Tacoma had to cross the Columbia River via ferry.

In the 1890s, the Northern Pacific Irrigation Company installed pumps and ditches to bring water for agriculture into the Kennewick Highlands. Once there was a reliable water source, orchards and vineyards were developed all over the Kennewick area. Strawberries were another successful crop.

Kennewick was officially incorporated on February 5, 1904. In 1912, there was an unsuccessful bid to move the seat of Benton County from Prosser to Kennewick.

In 1915, Kennewick was connected to the Pacific Ocean with the opening of the Dalles-Celilo Canal.

In the prologue to World War II, the United States opened the Hanford nuclear site roughly nine miles northwest of Kennewick. Its purpose originally was to help produce nuclear weaponry, which the US was trying to develop. The plutonium refined there was used in the Fat Man bomb used to attack Nagasaki in 1945 in the decisive final blow of World War II. Many employees of that site then commuted from Kennewick. As the Hanford site's purpose has evolved, there has continually been a tremendous influence from the site on the workforce and economy of Kennewick.

In 1996, an ancient human skeleton was found on a bank of the Columbia River. Known as Kennewick Man, the remains are notable for their age (some 9,300 years). Ownership of the bones has been a matter of great controversy. After court litigation, a group of researchers were allowed to study the remains and perform various tests and analyses. They published their results in a book in 2014. A 2015 genetic analysis confirmed that this ancient skeleton was ancestral to Native Americans of the area (some observers had contended that the remains were of European origin.) The genetic analysis has notably contributed to knowledge about the peopling of the Americas.

Columbia River crossed by Cable Bridge, which connects Pasco (left) and Kennewick (right). Clover Island is visible on the right.

Kennewick lies along the Columbia River and the famous Lewis and Clark Trail marked during the 1804-1806 exploration of the newly acquired Louisiana Territory, reaching to the Pacific Coast. 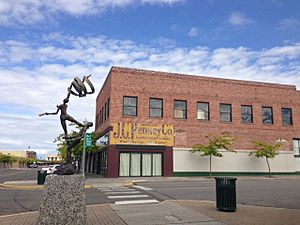 As of 2013, the historical downtown area is undergoing a rebirth. Historic buildings have been adapted to new uses and the compact, pedestrian-oriented area has attracted a diverse mix of businesses. These include a specialty gift boutique in a newly restored building, art galleries, wine bars and local breweries, upscale dining, and a full-service hardware center.

“Public artwork and recent streetscape improvements create a pleasing pedestrian environment. Through its efforts, the Historic Downtown Kennewick Partnership is creating new life for the commercial district while working to protect its pioneer heritage and historic buildings.”

The streets of downtown Kennewick are home to several bronze art sculptures.

Kennewick is the host city of the Tri-City Americans of the Western Hockey League and the Tri-City Outlaws of the United States Premier Hockey League. They both play their home games in the Toyota Center, which hosts many other regional events.

Every year during the summer, hydroplane racing takes place at the Water Follies event on the Columbia River. Residents from all of southeastern Washington come to Kennewick to shop in the city's commercial district, the center point of which is Columbia Center Mall.

Also, every year in August, the Benton-Franklin County Fair is held at the fairgrounds. Kennewick is the site of the annual Titanium Man (International Distance) and Plutonium Man (Half-Iron Distance) triathlons, attracting international contestants and observers. 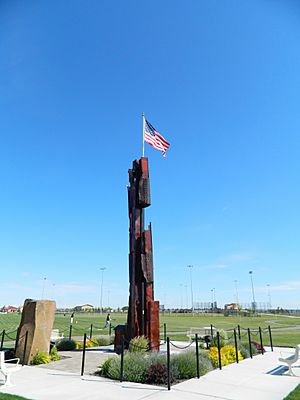 A 9/11 – World Trade Center Memorial Monument is in its Southridge area. Kennewick is one of a few cities to have acquired an external vertical support column artifact salvaged from the World Trade Center. Lampson International worked in conjunction with the City of Kennewick and the Port Authorities of New York and New Jersey to facilitate the monument's fabrication. The central part of the monument is a 35-foot (11 m) twisted column of steel weighing nearly 6,000 pounds (2,700 kg).

The memorial site was dedicated on the 10th anniversary of the tragedy in memory of the 2,977 men and women who lost their lives on September 11, 2001. The memorial is located at the Southridge Sports Complex at the southern entrance to the City of Kennewick. The site includes landscaping and benches placed for reflection and contemplation, and a US flag above the steel monument. 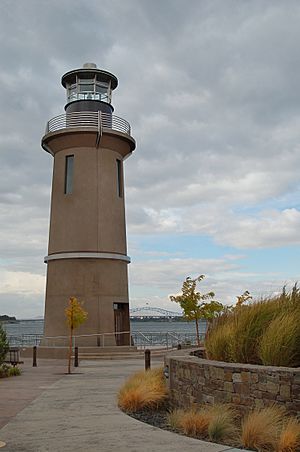 Clover Island is a 16-acre recreational destination near downtown Kennewick. It has restaurants, a hotel, and a yacht club, all enhanced by new public access for views of the river. By “constructing a gateway, pathway, lighthouse and public plaza on Clover Island, the Port of Kennewick created physical and visual access to the Columbia River and transformed a ‘distressed neighborhood’ into an urban waterfront destination.” Clover Island offers access to the beautiful scenery along the Columbia and continues to be a popular destination for recreation, wildlife viewing, and entertainment.

The view from Badger Mountain in Richland looking toward south Richland (foreground), Kennewick (upper right) and Pasco (across the Columbia River). Taken in January, this photo does not show the spring flower display.

Kennewick has a semi-arid climate (Köppen BSk), that closely borders on a desert climate (Köppen BWk). Winters are chilly but not severe, with frequent light rainfall, and hot, very dry summers made tolerable by the low humidity. Snowfall is light owing to the influence of the Cascade rain shadow, and the city receives less than half the rainfall of Spokane and less than one-eighth as much as Astoria on the Pacific coast.

There were 27,266 households of which 37.9% had children under the age of 18 living with them, 49.3% were married couples living together, 13.0% had a female householder with no husband present, 5.7% had a male householder with no wife present, and 32.0% were non-families. 25.7% of all households were made up of individuals and 8.8% had someone living alone who was 65 years of age or older. The average household size was 2.67 and the average family size was 3.22.

Kennewick has the following sister cities:

All content from Kiddle encyclopedia articles (including the article images and facts) can be freely used under Attribution-ShareAlike license, unless stated otherwise. Cite this article:
Kennewick, Washington Facts for Kids. Kiddle Encyclopedia.