The Cleveland Indians are an American professional baseball team based in Cleveland, Ohio. The Indians compete in Major League Baseball (MLB) as a member club of the American League (AL) Central division. Since 1994, they have played at Progressive Field and are the defending American League champions. The team's spring training facility is at Goodyear Ballpark in Goodyear, Arizona.

Since their establishment as a major league franchise in 1901, the Indians have won two World Series championships: in 1920 and 1948, along with eight Central Division titles and six American League pennants.

The Indians' current World Series championship drought is the longest active drought, and through 2016 is the fifth-longest in baseball history.

The name "Indians" originated from a request by club owner Charles Somers to baseball writers to choose a new name to replace "Cleveland Naps" following the departure of Nap Lajoie after the 1914 season. The name referenced the nickname "Indians" that was applied to the Cleveland Spiders baseball club during the time when Louis Sockalexis, a Native American, played in Cleveland.

Common nicknames for the Indians include the "Tribe" and the "Wahoos", the latter being a reference to their logo, Chief Wahoo. Also, the team's mascot is named "Slider."

The Indians' home uniform is white with midnight blue piping around each sleeve. Across the front of the jersey in script font is the word "Indians" in red with a midnight blue outline. The jersey has the Chief Wahoo logo on the left sleeve. The home cap is midnight blue with a red bill and features the Chief Wahoo logo on the front. Beginning with the 2016 season, the Indians returned to their 1994–2002 practice of wearing red shirts, belts, and socks with their home uniforms, having worn navy with the home uniform from 2003–2015.

The road uniform is gray, with "Cleveland" in navy blue block letters trimmed in red is across the front of the jersey, midnight blue piping around the sleeves, and the Chief Wahoo logo located on the left sleeve. The road cap is midnight blue with a red block "C" on the front. The Indians wear midnight blue shirts, belts, and socks with their away uniforms.

For all games, the team uses a midnight blue batting helmet with a red block "C" on the front. 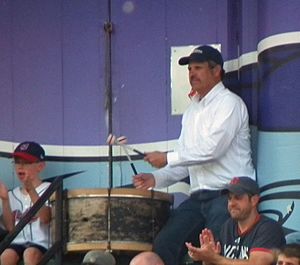 John Adams – who (along with his drum) has been an iconic fixture at Indians home games for over 40 years.

John Adams, known by baseball fans as "The Drummer", has played a bass drum at nearly every home game since 1973. He is the only fan for whom the team has dedicated a bobble head day. Adams originally paid for his tickets (one for himself, and one for his drum), but recently the Indians have paid for his seats in honor of the contributions he has made to the ballpark atmosphere. He has been featured and interviewed on national TV shows and newspaper articles.

Between June 12, 1995 and April 4, 2001, the Indians sold out 455 consecutive home games, drawing a total of 19,324,248 fans to Jacobs Field. The demand for tickets was so great that all 81 home games were sold out before Opening Day on at least three separate occasions. The sellout streak set a Major League Baseball record.

The Indians play "Hang On Sloopy" by The McCoys during the middle of the 8th inning, bringing with it the Ohio State Buckeyes' tradition of the fans chanting "O-H-I-O" during the chorus. They also play "Cleveland Rocks" at the end of the game for Indians wins.

The Indians over the years have been featured in numerous movies and television shows. Examples include:

Indians players who have had statues made in their honor in front of Progressive Field include:

All content from Kiddle encyclopedia articles (including the article images and facts) can be freely used under Attribution-ShareAlike license, unless stated otherwise. Cite this article:
Cleveland Indians Facts for Kids. Kiddle Encyclopedia.