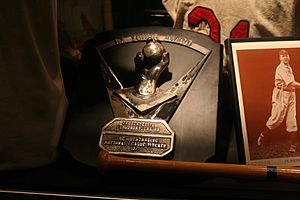 Each league's award is voted on by two members of the Baseball Writers Association of America in each league city, meaning 28 ballots are cast for the American League winner, and 32 for the National League. Each places a vote for first, second, and third place among the pitchers of each league. The formula used to calculate the final scores is a weighted sum of the votes: Score = 5F + 3S + T, where F is the number of first place votes, S is second place votes, and T is third place votes. The pitcher with the highest score in each league wins the award. If two pitchers receive the same number of votes, the award is shared between the two.

The current formula started with the 1970 season. Prior to that, writers only voted for the best pitcher and used a formula of one point per vote.

All content from Kiddle encyclopedia articles (including the article images and facts) can be freely used under Attribution-ShareAlike license, unless stated otherwise. Cite this article:
Cy Young Award Facts for Kids. Kiddle Encyclopedia.