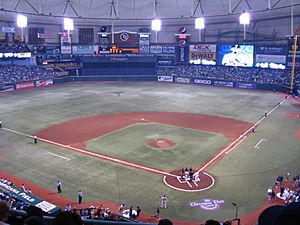 Tropicana Field is a domed baseball stadium that serves as the home field for the Tampa Bay Rays since 1998. The stadium was opened in 1990 in hopes of snatching a team away from another city. Two teams almost moved to Tampa to call Tropicana Field home; they were the Chicago White Sox and the San Francisco Giants. They stadium also served as the former home for the NHL team, Tampa Bay Lightning and the former home for the AFL's Tampa Bay Storm. Current Rays manager, Joe Maddon, has nicknamed the stadium "The Pit". While the fans nicknamed it "The Trop". The former name of the stadium was the Florida Suncoast Dome. It has also been called the Thunderdome.

All content from Kiddle encyclopedia articles (including the article images and facts) can be freely used under Attribution-ShareAlike license, unless stated otherwise. Cite this article:
Tropicana Field Facts for Kids. Kiddle Encyclopedia.