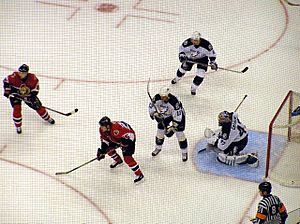 The Tampa Bay Lightning playing against the Ottawa Senators.

The Tampa Bay Lightning is an ice hockey team in the National Hockey League (NHL). They were formed in 1991, and began playing in 1992-93 NHL season.

Before the Lightning's Stanley Cup championship, the team was regarded as one of the worst team in the league. It made the play-offs once before winning the Southeast Division in 2002-03.

It won the Stanley Cup championship in 2003-04, the year before the NHL Lock-Out. Under the leadership of captain Dave Andreychuk, and the strong goaltending performance of goaltender Nikolai Khabibulin, the Lightning earned its first Stanley Cup over the Calgary Flames in 7 games.

All content from Kiddle encyclopedia articles (including the article images and facts) can be freely used under Attribution-ShareAlike license, unless stated otherwise. Cite this article:
Tampa Bay Lightning Facts for Kids. Kiddle Encyclopedia.