The Prince of Wales Trophy was donated by His Royal Highness, the Prince of Wales (later King Edward VIII and the Duke of Windsor), in 1924. It was first presented to the playoff champion of the NHL (replacing the O'Brien Trophy) who then went on to face the Western Hockey League (WHL) champion for the Stanley Cup.

With the Modern Era expansion in the 1967–68 season and the creation of the West Division, the Wales Trophy was awarded to the team that finished in first place in the East Division during the regular season. When the league formed two conferences in the season of 1974–75, the award was transferred to the team that finished with the best regular-season record in the Wales Conference. Starting with the 1981–82 campaign, when the league changed its playoff format so that the two teams meeting in the Stanley Cup finals could no longer come from the same conference, the trophy was presented to the Wales Conference playoff champions, and since the 1993–94 season, the Eastern Conference playoff champions have won the award.

Once awarded, the deputy commissioner, currently Bill Daly, would present the trophy to the winning team's captain. However, a traditional superstition that is prevalent among many of today's NHL players is that no player should either touch or hoist the Wales Trophy (or the Western Conference's trophy, the Clarence S. Campbell Bowl) when they have won the conference playoffs as the Eastern Conference champions. Players feel that the Stanley Cup is the only true championship trophy and thus it should be the only trophy that should be hoisted.

The Canadiens were league champions for these seasons. 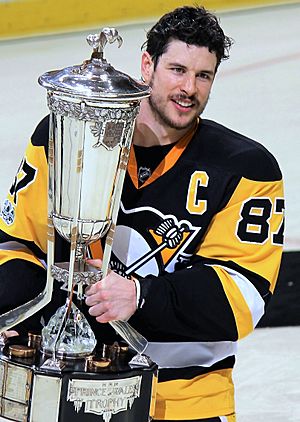 All content from Kiddle encyclopedia articles (including the article images and facts) can be freely used under Attribution-ShareAlike license, unless stated otherwise. Cite this article:
Prince of Wales Trophy Facts for Kids. Kiddle Encyclopedia.