The Nashville Predators are the current holders of the trophy after winning the 2017 Western Conference Final. 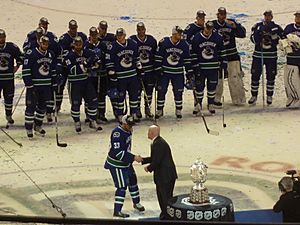 A traditional supersitition that is prevalent among many of today's NHL players is that no player should either touch or lift the Campbell (Western Conference champion) or Prince of Wales (Eastern Conference champion) Trophies after they have won the conference playoffs; the players feel that the Stanley Cup is the true championship trophy and thus it should be the only trophy that they should be hoisting.

All content from Kiddle encyclopedia articles (including the article images and facts) can be freely used under Attribution-ShareAlike license, unless stated otherwise. Cite this article:
Clarence S. Campbell Bowl Facts for Kids. Kiddle Encyclopedia.