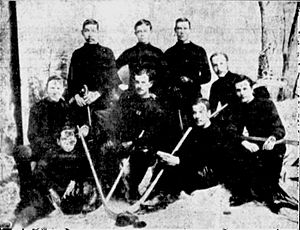 The Ottawa Senators were an amateur, and later, professional, ice hockey team based in Ottawa, Canada which existed from 1883 to 1954. The club was the first hockey club in Ontario, a founding member of the National Hockey League (NHL) and played in the NHL from 1917 until 1934. The club, which was officially the Ottawa Hockey Club (Ottawa HC), was known by several nicknames, including the Generals in the 1890s, the Silver Seven from 1903 to 1907 and the Senators dating from 1908.

All content from Kiddle encyclopedia articles (including the article images and facts) can be freely used under Attribution-ShareAlike license, unless stated otherwise. Cite this article:
Ottawa Senators (original) Facts for Kids. Kiddle Encyclopedia.