The Hillsborough River is a river located in the state of Florida in the United States. It arises in the Green Swamp near the juncture of Hillsborough, Pasco and Polk counties, and flows 60 miles (97 km) through Pasco and Hillsborough Counties to an outlet in the city of Tampa on Tampa Bay. It includes 4 nature trails extending for over 7 miles (11 km), making it perfect for hikers. The name Hillsborough River first appeared on a British map in 1769. At the time, the Earl of Hillsborough was the British Secretary of State for the Colonies, and thus controlled the pensions of the surveyors working in the American colonies, which included East Florida.

Geological data estimates that the Hillsborough River has been flowing for about 27,000 years. It is estimated humans first made their way to this area 12,000 - 15,000 years ago.

In the late 18th century the watershed of the Hillsborough River was a land covered by a rich, old growth forest. Majestic bald cypress, longleaf pine, and sand live oak were hundreds of years old (and in the case of cypress, thousands of years old). In the mid to late 19th century to about 1913 the watershed of this old growth forest began to be logged. As a result of this lumbering activity, most of the trees within the Hillsborough River basin are now less than 100 years in age. The harvesting of the old growth trees altered the ecosystems they dominated. Trees such as water ash and water locust were able to quickly grow in the sun-lit spaces created when bigger trees were removed. The riverine swamp forest as it exists today has a much different ecology than the ecosystem that had existed along the Hillsborough for the previous ten to 15,000 years.

(1757) A survey of the Hillsborough River is done by Don Francisco Maria Celi, pilot of the Spanish Royal Fleet. He ventures up to the Temple Terrace area in search of longleaf pine to use as masts for his ships. He names the pine forest of the area "El Pinal de la Cruz de Santa Teresa" or "The Pines of the Cross of Saint Teresa". There is a plaque commemorating his exploration at Riverhills Park in Temple Terrace.

(1772) A map drawn and sent to the Earl of Hillsborough, English Governor of West Florida, shows the river named as the Hillsborough. During the mid and late 18th century, Native Americans from the north, mostly Creek, begin to migrate to Florida. These immigrants become known as Seminoles.

(1824) Construction of Fort Brooke begins at the mouth of the Hillsborough River. 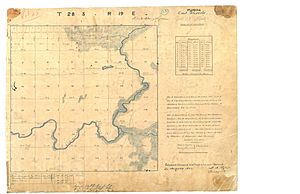 Survey of the middle Hillsborough River in 1843 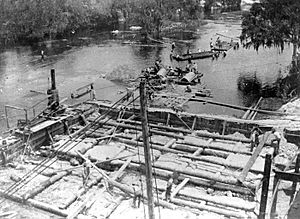 The original dam under construction in 1897 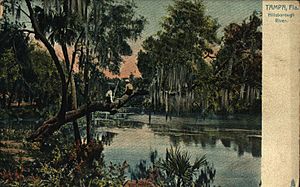 Postcard view of the Hillsborough River in 1910 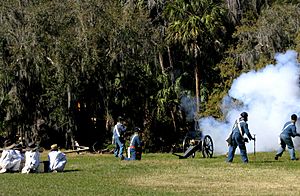 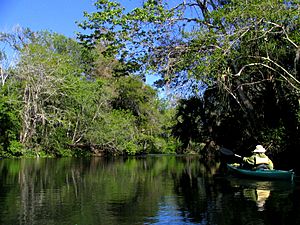 Paddling on the Hillsborough River 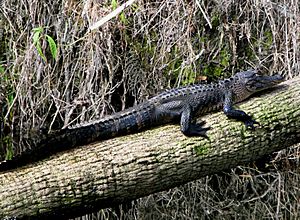 An Alligator snoozing in the sun 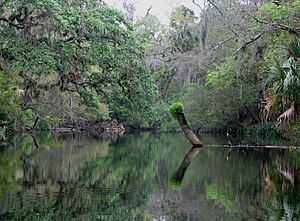 (1828) The Fort King Military Road (now State Road 41) is built to connect Fort King in Ocala with Fort Brooke in what was then the settlement of Tampa. A bridge is built to cross the Hillsborough.

(1830) Congress passes the Indian Removal Act. The American government begins efforts to remove the Seminole from Tampa Bay and relocate them to a reservation west of the Mississippi. Tensions between Seminole and Americans continue.

(1836) Fort Foster is established at the Hillsborough River crossing to protect this strategically advantageous position.

(1843) The Jean Street Shipyard is founded on the Hillsborough River in what will be the neighborhood of Seminole Heights.

(1846) The first ferry crossing on the Hillsborough River is established. This improves transportation and widens the growth of Tampa to both sides of the river.

(1861) During the American Civil War, Tampa Bay is blockaded by federal troops to prevent goods from leaving Tampa or from coming into Tampa.

(1863) Federal troops march upriver to a location near the present day site of Lowry Park Zoo. There they discover a blockade-running steamer and sloop loaded with cotton. The ships are burned. The skirmish that follows is the only Civil War action on the Hillsborough River.

(1897) At a cost of $150,000 an electrical dam is built on the river by Consumers Electric Light and Street Railway Company. The dam was located halfway between present-day 40th Street and 56th Street on the Hillsborough River (today's Temple Crest neighborhood.)

(1898) On December 13, 1898 the dam is dynamited by cattle barons angry at the loss of grazing land. They tried three times. The first on January 8, 1897,shortly after construction was completed. When the water is low, remnants of the dynamited dam can be seen.

(1899) Tampa's first water plant is built by the private Tampa Waterworks Company. It pumped well water to supply the City of Tampa until March 6, 1923, when the people voted to purchase the Waterworks plant.

(1911–1914) Bertha Potter Palmer (Bertha Palmer) (of Chicago and Sarasota) completes purchases of 19,000 acres (77 km2) bordering the Hillsborough River in present-day Temple Terrace, Temple Crest, Terrace Park, Busch Gardens and the University of South Florida area. She calls her property "Riverhills Ranch", an exclusive hunting preserve where she builds a lodge and guest houses among other structures. She dies in 1918.

(1923) The city of Tampa builds a water treatment plant to utilize the water supply from the water above the dam.

(1933) In a torrential 24-hour rain, floods wash away the Tampa Electric dam. TECO does not rebuild the dam and turns to other locations for electrical generating plants.

(1944) The city of Tampa completes construction on the current dam, to be used for the purpose of containing drinking water for the city, at the site of the old TECO dam. The old Tampa Waterworks Company is abandoned.

(1991) Canoe Escape is opened and the owners donate canoes and time to bring the Hillsborough River to the public's attention.

(1995) The Hillsborough River is designated as Outstanding Florida Waters.

(1995) The Hillsborough River is designated as a Florida Recreational Canoe Trail.

(1995) The Hillsborough River is named a Florida Sesquicentennial Greenway.

(1999) "Friends of the River" is created by local residents for the purpose of challenging the SWFWMD minimum flow of 10 cu ft/s (0.28 m3/s) of Sulphur Springs water alone for the river's only freshwater flow.

(2000) On the day after a massive Earth Day celebration at Lowry Park, highlighted by a "Flow-tilla" of dozens of boats from the Rowlett Park dam to Lowry Park, Friends of the River settles its legal challenge with agreement with SWFWMD, City of Tampa and Robert Thomas of Zephyrhills Water to study the river for 5 years to scientifically determine exactly how much freshwater is needed to restore and maintain the river's estuarine function. Friends of the River had maintained that the establishment of the minimum flow of 10 cu ft/s (0.28 m3/s) of Sulphur Springs water was a politically expedient solution with no basis in scientific data. Findings of the 5-year study to be used by SWFWMD as sole basis for modification of minimum flow.

(2007) "The Lower Hillsborough River Minimum Flow Recovery Strategy" is adopted, based upon SWFWMD's 5-year study that documented a need for freshwater over twice that provided by its original rule as challenged by Friends of the River. A minimum flow of 20 cu ft/s (0.57 m3/s) is adopted, combining the original 10 cu ft/s (0.28 m3/s) of Sulphur Springs water with 10 cu ft/s (0.28 m3/s) added to the river from water stored in Tampa Bypass Canal. Minimum flow adjusted upwards to 24 cu ft/s (0.68 m3/s) in spring months (April, May, June) when fish spawning activity occurs in restored estuary. Daily minimum flow begins December 31, 2007.

The Hillsborough River is home to many species, and several large bird rookeries exist. When local students reach sixth grade in Hillsborough County, they take a visit to the river for one to three days to learn about the ecosystem, watershed, and native Florida animals at a place called 'Nature's Classroom'. The Hillsborough River dam (originally built in 1895 and since rebuilt) at Rowlett Park creates a lake covering 1,300 acres (5 km2) and containing 1.6 billion US gallons (6,100,000 m3) of water, providing for the supply of water for the City of Tampa. The Hillsborough River was immortalized in 1973 by author Gloria Jahoda in her book River of the Golden Ibis.

With the construction of the dam in 1945, the portion of the River above the dam to approximately Fletcher Avenue is where the City of Tampa is permitted to withdraw water to supply to its citizens and those in Hillsborough County. In addition, Tampa Bay Water is permitted to withdraw water from the River during "high flow" times and under specific conditions. The Southwest Florida Water Management District, the agency required by Florida law to protect and manage the waters in the state, authorizes the permits.

With the establishment of the minimum flow of the upper and middle river by the Southwest Florida Water Management District in 2007 and its supporting Recovery Strategy, the City of Tampa and the District in partnership are implementing measures and projects to achieve the required flow in the lower river, while preserving the pristine nature of the middle and upper rivers.

Hillsborough River State Park includes 2,990 acres (12 km2) along the Hillsborough River in northeastern Hillsborough County. It supports many Floridian environments such as swamps and oak hammocks and many endangered species. The park's purpose is to preserve the "real Florida". Visitors to the park can participate in picnicking, camping, canoeing, hiking, fishing and swimming in a constructed pool. There is also a designated place to observe the river's class II rapids. It is one of the only rivers in Florida with rapids. The park opened in 1935 making it one of Florida's oldest state parks.

Water was supplied in Tampa's early days by private wells, cisterns and tanks. Tampa's first water plant went into operation on April 20, 1899, operated by the private Tampa Waterworks Company. It pumped well water to supply the City of Tampa until March 6, 1923, when the people voted to purchase the Waterworks plant for the city. The middle river has been Tampa's official source of water since 1944.

But the middle river is far more than just the source for some of Tampa's drinking water, it is a wonderfully diverse river ecosystem within the larger urban area surrounding it. Orange Lake, in the Temple Crest neighborhood, is an Audubon Society bird nesting and sanctuary, is also a living wetlands.

Upstream along the banks of Temple Terrace's Riverhills Park is a scene from old Florida, with cypress trees dotting the watery landscape.

All content from Kiddle encyclopedia articles (including the article images and facts) can be freely used under Attribution-ShareAlike license, unless stated otherwise. Cite this article:
Hillsborough River (Florida) Facts for Kids. Kiddle Encyclopedia.