Temple Terrace is an incorporated city in northeastern Hillsborough County, Florida, United States, adjacent to Tampa. As of the 2010 census, the city had a population of 24,541. It is the third and smallest incorporated municipality in Hillsborough County. (Tampa and Plant City are the others.) Incorporated in 1925, the community is known for its rolling landscape, bucolic Hillsborough River views, and majestic trees; it has the most grand sand live oak trees of any place in central Florida and is a Tree City USA. Temple Terrace was originally planned as a 1920s Mediterranean-Revival golf course community and is one of the first such communities in the United States (planned in 1920). 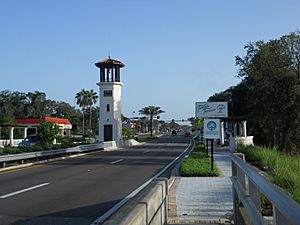 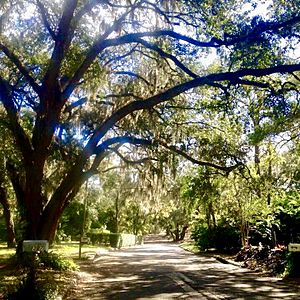 Temple Terrace was named for the then-new hybrid, the Temple orange, also called the tangor. It is a cross between the mandarin orange — also called the tangerine — and the common sweet orange; it was named after Florida-born William Chase Temple, one-time owner of the Pittsburgh Pirates, founder of the Temple Cup, and first president of the Florida Citrus Exchange. Temple Terrace was the first place in the United States where the new Temple orange was grown in large quantities. The "terrace" portion of the name refers to the terraced terrain of the area by the river where the city was founded. One of the original houses also had a terraced yard with a lawn sloping, in tiers, toward the river. 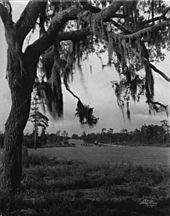 The original inhabitants of the Temple Terrace area were known as the Tocobaga, a group of Native Americans living around Tampa Bay, both in prehistoric and historic times, until roughly 1760. Their numbers declined in the seventeenth century, due, at least in part, to diseases brought to the New World by the Europeans, to which they had little natural resistance. All of the Florida tribes were also severely affected by the raids of Creeks and Yamasee during the late stages of the seventeenth century. In any case, the Tocobaga disappeared from history less than a hundred years later. 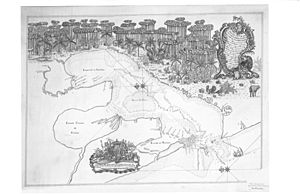 The earliest known map of the Tampa Bay area. It is by Spanish explorer Don Francisco Maria Celi of the Spanish Royal Fleet, 1757. This copy is from the South Florida History Museum; the original is in the Museo Naval de Madrid, Spain. The river on the upper left of the map is the Hillsborough, and the area designated as "El Pinal de la Cruz de Santa Teresa" is today in Temple Terrace. "El Salto" are the rapids at Hillsborough River State Park, where the journey ended. The map is oriented so that east is to the top.

Spanish exploration of the Temple Terrace area dates back to 1757 when explorer Don Francisco Maria Celi of the Spanish Royal Fleet made his way up the Hillsborough River (naming it "El Rio de San Julian y Arriaga") to what is now Riverhills Park in search of pine trees to use as masts for his ships. Here, in the extensive longleaf pine forest, he erected a cross in what he named "El Pinal de la Cruz de Santa Teresa" (the Pine Forest of the Cross of Saint Theresa). Confirmation of the fleet's travels is found in its map and log book. A historic marker and a replica of the cross erected to honor St. Theresa is found in Riverhills Park today. Up to 1913, the longleaf pine, sand live oak, and cypress trees made the area suitable for turpentine manufacturing and logging.

The area now known as Temple Terrace was originally part of an exclusive 19,000-acre (77 km2) game preserve called "Riverhills" belonging to Chicago socialite Bertha Palmer (also known as Mrs. Potter Palmer). (She played an extensive role in making Sarasota, Florida the "City of the Arts" that it is today. She was one of the largest landholders, ranchers, farmers, and developers in Florida at the turn of the twentieth century.) The Evening Independent newspaper in 1918 described the preserve as "a well stocked hunting preserve north of Tampa being one of the most attractive hunting grounds in the state.” Property acquisition by the Palmers and the Honorés began in 1910; only one of the original buildings from the preserve, now known as the Woodmont Clubhouse, remains. Because it escaped logging, the grounds of the clubhouse harbor some of the largest specimens of live oak and longleaf pine in the city.

Mrs. Potter-Palmer’s vision for her property was that it be developed into a golf course community surrounded by extensive citrus groves, but her death in 1918 prevented her from fully realizing that vision. At her death, the trustee of her estate and brother, Adrian Honoré, sold her local land holdings to Burks Hamner,

Vance Helm, Maud Fowler, Cody Fowler, and D. Collins Gillett, who formed two development corporations—Temple Terrace Estates, Inc., which developed the golf course and residential areas; and Temple Terraces, Inc., which developed 5,000 acres (20 km2) of orange groves that originally surrounded the city to the west and north, the largest orange grove in the world in the 1920s. (Adrian Honoré retained a seat on the board.) D. Collins Gillett oversaw Temple Terraces, Inc. and owned the first and largest citrus nursery in Florida, Buckeye Nurseries of Tampa. His father, Myron E. Gillett, thirty-first mayor of Tampa, was instrumental in popularizing the exotic hybrid Temple orange in the US.

The 1920 Vision for the community was that wealthy retired Northerners would purchase one of the lots in Temple Terrace, build a Mediterranean Revival villa on the lot and also purchase a parcel in the extensive adjoining citrus grove to either manage as a hobby or provide extra income. Temple Terrace was originally only occupied during "The Season" (which lasted roughly from December to the annual Washington Ball held at the clubhouse on February 22). The rest of the year the houses were cared for by caretakers until The Season came again and the homeowners returned.

In 1924, part of the 5,000-acre (20 km2) area platted as the Temple Orange grove and called Temple Terraces, Inc. was developed into the present day neighborhood of Temple Crest, immediately adjacent to Temple Terrace and to its west, hugging the Hillsborough River. The land occupied by nearby Busch Gardens was also part of Mrs. Palmer's original 19,000-acre (77 km2) ranch.

In 1925 and 1926, the Temple Terrace Golf and Country Club (which is still in existence) hosted the Florida Open (in 1925 billed as the "Greatest Field of Golfers ever to Play in Florida"). "Long" Jim Barnes was resident professional of the course at the time (James Kelly Thomson was the course's first pro), and every major golfer of the day competed in the event except for Bobby Jones. Leo Diegel won the tournament. Jim Barnes' friend Fred McLeod is also associated with the early days of the course. The golf-course architect was Tom Bendelow, who also designed Medinah Country Club's Course #3 in Chicago, a 7,508-yard (7,385 m) golf course which has hosted three U.S. Opens (1949, 1975, 1990) and two PGA Championships (1999, 2006). The golf course of the Temple Terrace Golf and Country Club is virtually unchanged since its design by Bendelow and is eligible for the National Register of Historic Places. It measures 6,414 yards with a par of 72. 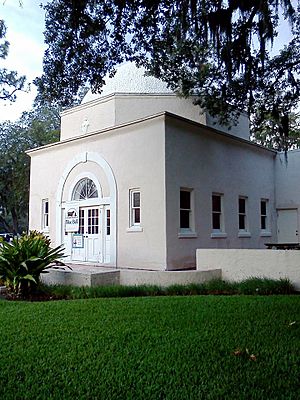 Temple Terrace is one of the first planned golf-course communities in the United States (1920). The town plan was created by town planner and landscape architect George F. Young, who also created the plan for nearby Davis Islands (Tampa) and McClelland Park (Sarasota), among others. The architecture was designed in the Mediterranean-Revival style by two different architects at two different time periods. The first phase was in 1921 by noted Tampa architect M. Leo Elliott (Centro Asturiano de Tampa and Old Tampa City Hall) who designed the initial houses and the public buildings. In 1926 renowned New York architect Dwight James Baum (architect of John Ringling's Ca' d' Zan, the Hotel El Verona in Sarasota, and the West Side YMCA in New York City) also designed residences in Temple Terrace. 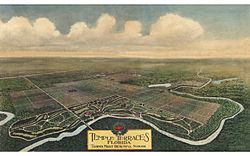 The Vision: 1922 Temple Terrace Master Plan (looking northwest). Recently discovered colorized photograph showing the “world’s largest citrus grove in the 1920s” (5,000 acres (20 km2) of Temple oranges) to the west and north surrounding the village. The Hillsborough River is in the foreground; the Bullard Parkway bridge crosses the river; 56th Street does not yet exist; but Nebraska Avenue is on the left horizon.

Temple Terrace struggled through the 1930s like the rest of Florida. Building activity began to pick up again after World War II. There is now a fine collection of mid-century modern homes and buildings, at least two of which were designed by well-known architect Frank Albert DePasquale.

Florida Bible Institute bought the old Country Club Clubhouse in the late 1930s from the city for back taxes and remains a cherished part of Florida College. Florida College is now a private liberal arts college (founded in 1946) and occupies some of the community's oldest buildings, including the Temple Terrace Country Club, which is now Sutton Hall. Billy Graham attended Florida Bible Institute, which owned the property now occupied by Florida College, in the late 1930s. In his autobiography he writes that he received his calling "on the 18th green of the Temple Terrace Golf and Country Club". A Billy Graham Memorial Park is on the east side of the 18th green on the river.

Temple Terrace is currently in the process of redeveloping 50 acres (200,000 m2) (the southeast quadrant) of its 1960s-era downtown. The goal of the city is to build a mixed-use, medium-density, pedestrian-oriented downtown.

The site of the new downtown area is the site of the downtown area that was originally planned in the 1920s but never built because of the Great Depression. Many of the planning concepts and architecture of the redevelopment area are based on the original plan and Temple Terrace's unique 1920s historic Mediterranean Revival architecture.

Many of Temple Terrace's residents teach or work at the nearby University of South Florida, and the close-knit community has strong ties to that institution. (The USF campus was also part of Mrs. Palmer's original 19,000-acre (77 km2) ranch.)

Eureka Springs Park, located to the east of Temple Terrace, is Hillsborough County's only botanical garden. The 31-acre (130,000 m2) park was started by Russian immigrant and amateur horticulturalist Albert Greenberg, who donated his park to the county in 1967. Poet Robert Frost and other famous personalities made it a point to visit Greenberg in the years prior to World War II.

The Museum of Science & Industry, commonly called MOSI, is located in Tampa near the Temple Terrace city line.

Sitting just one mile to the west of Temple Terrace, is Busch Gardens Tampa.

Temple Terrace has a sister city:

Temple Terrace has one library located within the city, the Temple Terrace Public Library, which is part of the Hillsborough County Library Cooperative.

All content from Kiddle encyclopedia articles (including the article images and facts) can be freely used under Attribution-ShareAlike license, unless stated otherwise. Cite this article:
Temple Terrace, Florida Facts for Kids. Kiddle Encyclopedia.