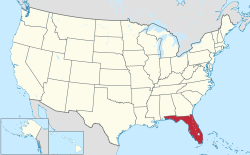 Map of the United States with Florida highlighted 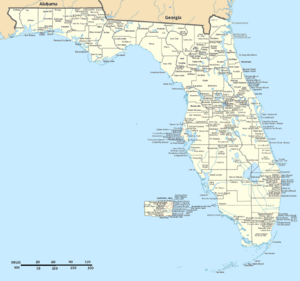 Florida is a state located in the Southern United States. There are 282 cities, 109 towns, and 20 villages in the U.S. state of Florida, a total of 411 incorporated municipalities. They are distributed across 67 counties, in addition to 66 county governments. Jacksonville has the only consolidated city–county government in the state, so there is no Duval County government. However, smaller municipal governments exist within the consolidated municipality, i.e., Baldwin and the Jacksonville Beaches. All but two of Florida's county seats are incorporated municipalities (the exceptions are Crawfordville, county seat of rural Wakulla County; and East Naples, county seat of Collier County).

The formation and dissolution of municipalities is governed by Chapter 165 of the Florida Statutes. All Florida municipalities must be operated under a municipal charter approved by a majority of the registered voters in the geographic area of the municipality, which must be confirmed by the state legislature through special legislation.

The largest cities in Florida (population over 200,000) utilize the strong mayor–council form of government. The mayor typically appoints a chief administrative officer who performs the same function as a city manager which is utilized by 70% of Florida's municipalities, whose mayors are primarily symbolic and ceremonial.

Note: The table of contents only applies when the list is sorted by place name.

All content from Kiddle encyclopedia articles (including the article images and facts) can be freely used under Attribution-ShareAlike license, unless stated otherwise. Cite this article:
List of municipalities in Florida Facts for Kids. Kiddle Encyclopedia.