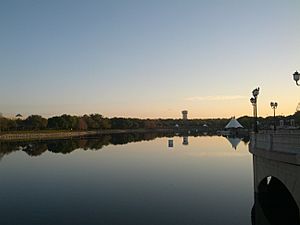 Dr. Washington Kilmer of Cincinnati was the first person of European background to settle into the area circa 1870, and he named the area Altamont (minus the "e" from the present spelling) after Altamont, New York, an area near his childhood home. In 1882, the Altamonte Land, Hotel and Navigation Company, founded by Thomas C. Simpson and four other Massachusetts businessmen, gave the area its present name: Altamonte Springs. The company developed the core community along Altamonte Avenue (today's SR 436) between Maitland and Longwood Avenues (today's Ronald Reagan Boulevard). On November 11, 1920, the residents of Altamonte Springs voted 38 to 7 in favor of incorporation. 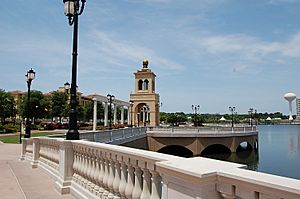 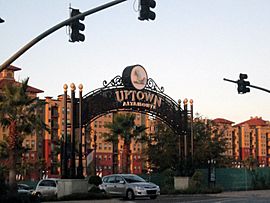 Cranes Roost Park, Cranes Roost Lake, and the general area on State Road 436 east of Interstate 4 is known as the central area of the city. This is the area that borders Interstate 4 which is the main interstate highway for Central Florida connecting Daytona Beach, Orlando, and Tampa. An outdoor town center was recently opened named 'Uptown Altamonte' which marks the central business district of the city. Cranes Roost at Uptown Altamonte features a water fountain choreographed to classical, swing and contemporary music.

This city center incorporates large-scale apartment buildings and planned high rise condominiums. The construction also includes mixed use shops and retailers. The park area includes a square for weddings, festivals, and city holidays. The spot has become popular with Altamonte Springs residents, and attracts residents from nearby Longwood, Casselberry, and Maitland. Future plans include two high rise residential structures (in excess of 10 stories) and a series of parking structures to facilitate visitors.

The area includes the Altamonte Mall, a 4-anchor indoor shopping mall, which includes an 18-screen AMC Theatre. Many restaurants are located near the mall such as several Darden Restaurants, Denny's, and Jason's Deli.

Altamonte Springs is served by SunRail, the Central Florida Commuter Rail system. The station opened on May 1, 2014.

All content from Kiddle encyclopedia articles (including the article images and facts) can be freely used under Attribution-ShareAlike license, unless stated otherwise. Cite this article:
Altamonte Springs, Florida Facts for Kids. Kiddle Encyclopedia.