Seminole County ( SEM-i-nohl) is a county located in the central portion of the U.S. state of Florida. As of the 2010 census, the population was 422,718. Its county seat and largest city is Sanford. Seminole County is part of the Orlando-Kissimmee-Sanford, Florida Metropolitan Statisticial Area.

On July 21, 1821, two counties formed Florida: Escambia to the west and St. Johns to the east. In 1824, the area to the south of St. Johns County was designated Mosquito County, with its seat at Enterprise. The county's name was changed to Orange County in 1845 when Florida became a state, and over the next 70 years several other counties were created. Seminole County was one of the last to split.

Seminole County was created on April 25, 1913 out of the northern portion of Orange County by the Florida Legislature. It was named for the Seminole people who historically lived throughout the area. The name "Seminole" is thought to be derived from the Spanish word cimarron, meaning "wild" or "runaway."

Seminole County's location between Volusia County and Orange County has made it one of Florida's fastest-growing counties. The Greater Orlando Metropolitan District which includes Seminole, Osceola, and the surrounding counties of Lake and Orange counties, together with neighboring Volusia and Brevard counties create a viable, progressive and diverse setting for economic growth and residential development.

There were 139,572 households, out of which 33.9% had children under the age of 18 living with them, 54.3% were married couples living together, 11.5% had a female householder with no husband present, and 30.3% were non-families. 22.9% of all households were made up of individuals, and 6.6% had someone living alone who was 65 years of age or older. The average household size was 2.59 and the average family size was 3.07. The Department of Education states that in 2003, school enrollment was approximately 72,630. As of 2006, the Seminole County School District was the 52nd largest in the nation. As of 2020, the Seminole County School District was the 12th largest school district in Florida and 60th nationally with more than 67,000 students and 10,000 employees. 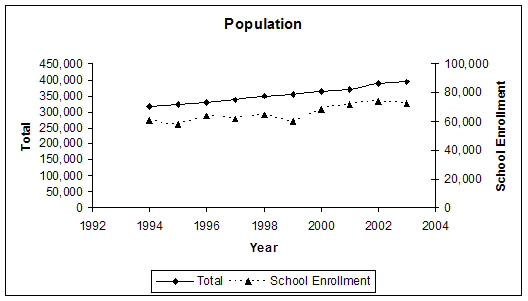 The following reflects the latest year available for religious statistics, which was 2000.

AAA and Ruth's Hospitality Group have their headquarters in Heathrow, unincorporated Seminole County.

Per Capita Income and Unemployment Rate 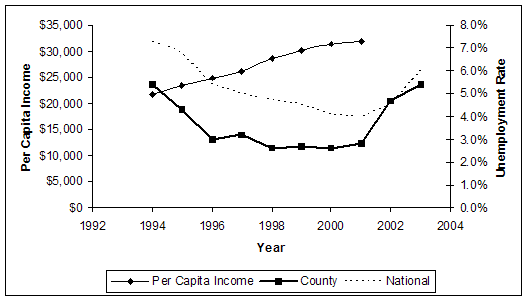 All content from Kiddle encyclopedia articles (including the article images and facts) can be freely used under Attribution-ShareAlike license, unless stated otherwise. Cite this article:
Seminole County, Florida Facts for Kids. Kiddle Encyclopedia.