Longwood is a city in Seminole County, Florida, United States. The population was 13,657 at the 2010 census. It is part of the Orlando–Kissimmee–Sanford, Florida Metropolitan Statistical Area.

There were 5,244 households out of which 35.1% had children under the age of 18 living with them, 55.8% were married couples living together, 12.6% had a female householder with no husband present, and 26.8% were non-families. 19.5% of all households were made up of individuals and 8.2% had someone living alone who was 65 years of age or older. The average household size was 2.68 and the average family size was 3.09. 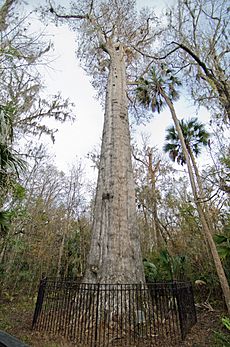 Coastal tribes used "The Senator", a 3000-year-old bald cypress which burned down in 2012, to find their way over land from the St. Johns River to trading grounds at Spring Hammock. Later, when Creek Indians and others from the tribes of the Southeast United States fled into Spanish Florida and settled new villages among escaped African slaves, they became the Seminoles.

Longwood, as well as most of Seminole County, shares its American Colonial history with the early settlement of Orange, Lake, Brevard, Volusia and Osceola Counties that make up the Greater Orlando metropolitan area and its surrounding environs. Central Florida's development began after the Second Seminole War. By the early 1860s, the cities of Sanford and Orlando were small settlements. Settlers began arriving at what would become Longwood during the lull between the end of the Seminole Wars in the 1850s and the beginning of the American Civil War in 1861. 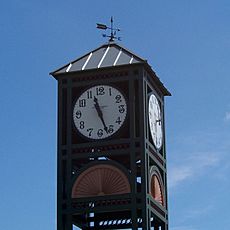 The earliest settlers to the Longwood area arrived in the early 1870s. John Neill Searcy came from Tennessee in March 1873, and Edward Warren Henck arrived from Boston in November of the same year. Both came by steamboat up the St. Johns River to Sanford and were soon granted Longwood homesteads. A small community had begun to develop. Mr. Henck found the Hartley Family homesteading at Fairy Lake (which is now the Columbus Harbor neighborhood) when he first arrived. "There were no other inhabitants in what is now the corporation of Longwood.", Henck wrote in a brief history of his early days in Florida for historian William Fremont Blackman's History of Orange County, Florida, published in 1927.

E.W. Henck was a railroad man, hotel owner and real estate promoter who selected his homestead on land south of Myrtle Lake. On May 19, 1876, the Longwood Post Office was established with Henck as the first postmaster. He selected the name Longwood after a suburb of Boston, which he as a young engineer helped lay out.

Henck led a group of local businessmen in getting the first post-Civil War railroad, the South Florida Railroad, constructed in Florida. Regular rail service between Orlando and Sanford started November 15, 1880. Henck was elected Longwood's first mayor in 1885. A decade later, Longwood had five churches, three hotels (two of which were built by Henck), eight stores and a weekly newspaper.

Another early settler from Boston, Frederick Rand, together with the Searcy family, founded Christ Episcopal Church, which still stands on Church Avenue. Rand was also associated with Henck and the founding of the railroad. By 1886 the population had reached 1,000, making Longwood among the largest communities in Central Florida.

Another early settler of Longwood is Pyotr Alekseyevich Dementyev, whose name was later shortened to Peter Demens. He was 31 when he came to Florida in June 1881. Upon arriving in Longwood, Demens bought 30 acres (120,000 m2) of groves and a 30 percent interest in a local sawmill, later buying out his partners. His expansion plans included a contract to build railroad station houses from Lakeland to Dade City. He also supplied labor and material for buildings at Rollins College. He became owner of a charter for a railroad to run from the community of Lake Monroe to south of Lake Apopka. He completed the line to the new town of Oakland and later to the Tampa Bay area. The town at the end of the line became St. Petersburg, a name honoring Demens' hometown. By 1889, Demens sold his railroad and moved to North Carolina.

The Great Freeze of December 1894 and January 1895 caused a major exodus from Central Florida. By the 1900 census, Longwood's population had declined to 325. During the 1910-1920 period, the area started to grow again, and by the mid-1920s the Boom Era was at its peak. In 1923, the Town of Longwood was incorporated as a city and the Old Dixie Highway was constructed as the precursor of present-day County Road 427 (formerly State Road 427), now known within the city limits of Longwood as Ronald Reagan Boulevard. In 1924, the Lyman School was opened as a Grades 1 - 12 facility. The precursor of the present day Lyman High School, the campus was located at what is now the Milwee Middle School, remaining there until the construction of the current Lyman High School campus in 1968 and 1969. With the coming of the Depression, development stopped. The City's only bank failed in 1932 and Longwood sought, unsuccessfully, to dis-incorporate. Toward the end of the 1930s, some growth did occur, and by the beginning of the 1940s the population of the incorporated city was 406.

With the advent of World War II, growth began to impact Longwood as military personnel flowed into the new Naval Air Station Sanford to the north and Orlando Army Air Base to the south. By the 1950s, NAS Sanford was being converted into a Master Jet Base for carrier-based heavy attack aircraft and, along with the re-designated Orlando Air Force Base and nearby Pinecastle AFB (later renamed McCoy AFB), saw even more military families renting or purchasing homes in and around Longwood. In 1959, the City had slightly over 1,000 residents and a city limit boundary that measured approximately 1-mile (1.6 km) by 1-mile (1.6 km) square. In 1960, Longwood Elementary School was constructed and opened inside the city limits. During the 1950s and 1960s, the city also boasted its own airport, a single runway grass airstrip used mainly by private airplanes. Longwood Airport was located on the west side of the city and on the north side of State Road 434, until it was closed and developed into tract housing that became The Woodlands subdivision in the mid-1960s.

In 1965, the City served as a film site and backdrop, representing a fictional south Florida town adjacent to a Seminole Indian tribe reservation in the Universal Studios film, Johnny Tiger. Released in 1966, the film starred Robert Taylor, Geraldine Brooks and Chad Everett.

New economic and development opportunities were brought to the area in the 1960s and 1970s, fueled by both the military and the space industry, as newly-arriving Longwood residents were employed at Martin-Marietta's new missile plant in Orlando; Naval Air Station Sanford; Orlando Air Force Base (redesignated Naval Training Center Orlando in 1969); and McCoy Air Force Base in Orlando; as well as Cape Canaveral Air Force Station; Patrick Air Force Base; and the NASA John F. Kennedy Space Center in Brevard County. The development and opening of Walt Disney World in October 1971, along with other tourist attractions and the high technology corridor of businesses, especially those engaged in the modeling, simulation and training (MS&T) industry and associated military training systems activities near Florida Technological University (FTU), now the University of Central Florida (UCF), fueled even further growth. Short term economic downturns caused by the closure of NAS Sanford in 1968 and McCoy AFB in 1975 were offset with other economic growth across Central Florida during the 1970s and 1980s. As a result, Longwood developed into primarily a residential community for residents working elsewhere in Seminole County or in adjacent Orange County. By 2000, the city had taken significant steps to revitalize its downtown historic district, expanded its borders through annexation and in the process gained a resident population exceeding 13,700. 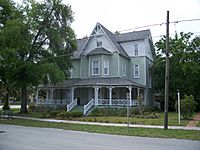 Longwood area congregations include the following, which share in an annual community Thanksgiving Eve worship and an annual CROP walk to combat hunger:

All content from Kiddle encyclopedia articles (including the article images and facts) can be freely used under Attribution-ShareAlike license, unless stated otherwise. Cite this article:
Longwood, Florida Facts for Kids. Kiddle Encyclopedia.