Kids Encyclopedia Facts
This page is about the city in Florida. For other uses, see Sanford (disambiguation).

Sanford is a city in the central region of the U.S. state of Florida and the county seat of Seminole County. As of the 2010 census, its population was 53,570.

Known as the "Historic Waterfront Gateway City," Sanford sits on the southern shore of Lake Monroe at the head of navigation on the St. Johns River. Native Americans first settled the area thousands of years before the city was formed. The Seminoles arrived in the area in the 18th century. During the Second Seminole War in 1836, the United States Army established Camp Monroe and built a road now known as Mellonville Avenue. Sanford is about 20 miles (32 km) northeast of Orlando.

Sanford is home to Seminole State College of Florida and the Central Florida Zoo and Botanical Gardens. Its downtown attracts tourists with shops, restaurants, a marina, and a lakefront walking trail. The Orlando Sanford International Airport, in the heart of the town, functions as the secondary commercial airport for international and domestic carriers in the Orlando metropolitan area.

The city's RiverWalk trail is a bike/walk/run trail that was completed in 2004. The ten-foot wide paved walkway spans a distance of several miles in Sanford's downtown area along the waterfront of Lake Monroe. Phase 2, which adds over 3000 feet to the trail, was completed in 2014.

The city is redoing the face of Sanford Avenue, one of the main streets, with a new brick road, wider sidewalks, trees, flowers, and benches.

Sanford is connected to the central Florida commuter railway SunRail, with the station 2 miles from the downtown.

To support the its green initiatives, Sanford has added five electric car charging stations. The city is proposing to replace streetlamp bulbs with LED lights.

In 2012, the city launched the "Imagine Sanford" initiative, which asks all Sanford residents to get involved in city planning by submitting and voting on improvement ideas via the city's Imagine Sanford website. The city of Sanford also launched a redesigned city government website in 2012.

The Mayaca or Jororo Indians inhabited the shores of Lake Monroe at the time of European contact. By 1760, however, war and disease had decimated the tribe, which would be replaced by the Seminole Indians. Florida was acquired by the United States from Spain in 1821, but the Seminole Wars would delay settlement. In 1835, the Seminoles burned the port of Palatka on the St. Johns River, then the major artery into Central Florida from the East Coast. Consequently, an army garrison was established upstream, on the southern side of Lake Monroe near a trading post. Called Camp Monroe, the log breastwork was attacked on February 8, 1837. It would be strengthened and renamed Fort Mellon in honor of Captain Charles Mellon, the sole American casualty. 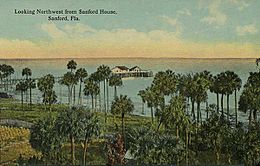 General Zachary Taylor had a road built connecting a string of defenses from Lake Monroe to Fort Brooke (now Tampa). The town of Mellonville was founded around Fort Mellon in 1842 by Daniel Stewart. In 1845, Florida became a U.S. state, and Mellonville became county seat of Orange County, formerly called Mosquito County with its county seat across the lake at Enterprise. Orange groves were planted, with the first fruit packing plant built in 1869. In 1870, "General" Henry Shelton Sanford bought 12,548 acres (50.78 km2) to the west of Mellonville and laid out the community of Sanford. Believing it would become a transportation hub, he called it "The Gateway City to South Florida."

Several groups of Swedes were imported as indentured servants to do the back-breaking labor of establishing a new town and clearing the sub-tropical wilderness in advance of creating a citrus empire, arriving by steamboat in 1871. Incorporated in 1877 with a population of 100, Sanford absorbed Mellonville in 1883. The South Florida Railroad ran a line from Sanford to Tampa, later the Jacksonville, Tampa and Key West Railroad ran a line to Jacksonville, and the area became the largest shipper of oranges in the world. Arriving by steamer in April 1883, President Chester A. Arthur vacationed a week at the Sanford House, a lakeside hotel built in 1875 and expanded in 1882.

In 1887, the city suffered a devastating fire, followed the next year by a statewide epidemic of yellow fever. When the Great Freeze of 1894 and 1895 ruined the citrus industry, farmers diversified by growing vegetables as well. Celery was first planted in 1896, and until 1974 the community would be nicknamed Celery City.

On December 1, 1891, merchant William Clark and registered African American voters of Goldsboro incorporated as a town just to the south of Sanford.

In 1911, the community of Sanford Heights seceded from Sanford, because of discord over municipal services provided by Sanford. This added to concerns that Sanford's ability to expand would be constrained by the surrounding towns of Goldsboro, Georgetown and Sanford Heights, as well as Lake Monroe to the north. Florida State Representative and former Sanford mayor Forrest Lake led legislative efforts to curtail Sanford Heights' ability to incorporate, independent of Sanford. Goldsboro was also a target in Forrest Lake's annexation process, prompting Goldsboro's leaders to start a letter writing campaign to local newspapers. On April 6, 1911, the Sanford city council passed a resolution to annex Goldsboro and on April 26, 1911 the Florida legislature passed the Sanford Charter Bill, dissolving the incorporation of both Sanford and Goldsboro, and reorganizing Sanford as a city that included Goldsboro within its boundaries.

In 1913, Sanford became county seat of Seminole County, created from Orange County. Agriculture continued to dominate the economy until 1940, when it proved cheaper to cultivate produce in frost-free South Florida.

In 1942, Naval Air Station Sanford was established, which conducted operational training in the Lockheed PV-1 Ventura, Lockheed PBO Hudson, Grumman F4F/General Motors FM-1 Wildcat and the Grumman F6F Hellcat. At its peak in 1943-45, NAS Sanford was home to approximately 360 officers, 1500 enlisted men and 150 WAVES and included an auxiliary airfield to the east near Lake Harney known as Outlying Field Osceola. The base was inactivated and reduced to caretaker status in 1946, but was reactivated in 1950 in response to the Korean War and the Cold War. A major construction program ensued, with NAS Sanford redeveloped as a Master Jet Base for carrier-based Douglas A-3 Skywarrior and later North American A-5A and RA-5C Vigilante aircraft. At its peak in the mid-1960s, the base was home to nearly 4000 military personnel, comprising the air station personnel complement, an Aircraft Intermediate Maintenance Department, the Navy Dispensary, the Marine Barracks, a Replacement Air Group/Fleet Replacement Squadron for the RA-5C, and nine deployable Fleet RA-5C squadrons that routinely deployed aboard large aircraft carriers to the Mediterranean and the Pacific. The latter were heavily enagaged in combat operations during the Vietnam War.

As a result of the increasing costs of the Vietnam War and concurrent federal domestic spending related to President Lyndon Johnson's Great Society social programs, NAS Sanford was one of several stateside military installations identified for closure by the Department of Defense in 1967. Flight operations were rapidly scaled down during 1968 as the squadrons of Reconnaissance Attack Wing ONE transferred to the former Turner AFB, renamed NAS Albany, Georgia. This resulted in a significant economic downturn for the City of Sanford and Seminole County with the departure of all military personnel and their families. The airfield was conveyed to the City of Sanford via quitclaim deed by the General Services Administration (GSA) in 1969, renamed Sanford Airport and redeveloped as a general aviation facility. Subsequently renamed Sanford Regional Airport, then Central Florida Regional Airport, the airport commenced commercial airline service in 1995 and was renamed Orlando Sanford International Airport the following year. The Navy's presence is commemorated on the airport by two historical markers and the NAS Sanford Memorial Park, which was dedicated on Memorial Day in May 2003 and includes a restored RA-5C Vigilante on loan from the National Naval Aviation Museum that was placed on permanent static display at the entrance to the commercial airline terminal.

The opening of Walt Disney World in October 1971 shifted the economy of Central Florida away from agriculture, military installations and the NASA manned and unmanned space programs, and further towards tourism, service industries and residential development, the center of which is Orlando. But because of Sanford's former preeminence as a trade center, the city retains a significant collection of older commercial and residential architecture, on streets shaded by live oaks hung with Spanish moss. Its location on Lake Monroe and access to the navigable waterway of the St. Johns River has made it Central Florida's additional center for numerous marinas, allowing access for pleasure boats and commercial vessels to and from the Atlantic Ocean and the Intracoastal Waterway via Jacksonville and Mayport to the north.

Historic Sanford Memorial Stadium is a baseball stadium located in Sanford, Florida. The ballpark is located just south of Lake Monroe on Mellonville Avenue, less than a mile from Historic Downtown Sanford. The stadium stands near the site of the old Sanford Field, which was originally built in 1926. The new stadium was built in 1951 as the Spring Training Facility of the New York Giants. Many Major League stars have played in the stadiums including Babe Ruth, Jackie Robinson, Willie Mays, Tim Raines, and David Eckstein. Sanford Field is the location where Jackie Robinson first took to the field in 1946 to play baseball as a member of a white Class AAA International League Team in Daytona Beach, Florida, which was partnered with the Montreal Royals. After Robinson's turn at bat, a grumbling crowd made it a wise decision by the Chief of Police to have him removed from the game. The precedent had been set.

Sanford was historically a hub for Central Florida transportation as port on the St. Johns River. The Orlando Sanford International Airport provides international and commuter airline service for central Florida. Sanford is the southern terminus of Amtrak's Auto Train which conveys Eastern Seaboard travelers and their vehicles to Lorton, Virginia, about 25 miles (40 km) south of Washington, D.C.

Sanford is near the northern end of the I-4 Corridor between Daytona Beach and Orlando. The State Road 417 or Central Florida GreeneWay begins in Sanford at Interstate 4 and forms the Eastern Beltway around Orlando ending at Walt Disney World.

SunRail, the Central Florida commuter rail system, serves the city out of a new station off of State Road 46.

All content from Kiddle encyclopedia articles (including the article images and facts) can be freely used under Attribution-ShareAlike license, unless stated otherwise. Cite this article:
Sanford, Florida Facts for Kids. Kiddle Encyclopedia.