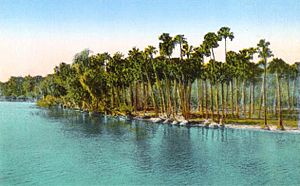 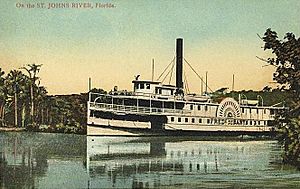 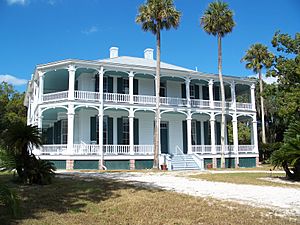 DeBary is a city in Volusia County, Florida, United States, on the eastern shore of the St. Johns River near Lake Monroe. According to the 2020 U.S. Census, the city had a population of 20,696. It is part of the Deltona–Daytona Beach–Ormond Beach, FL metropolitan statistical area, which was home to 553,284 people in 2019.

The Timucuan Indians once lived in the vicinity of Lake Monroe, where the domain of Chief Utina extended to just north of Lake George. They hunted, fished and gathered plants and berries from the forest. By 1760, however, the Timucua had disappeared and been replaced by the Seminole tribe from Alabama and Georgia. Florida was acquired from Spain in 1821, but the Seminole Wars would delay settlement. In 1866, Elijah Watson of Enterprise sold land to Oliver and Amanda Arnett on the northern shore of the St. Johns River at Lake Monroe, where they built a house.

The couple in turn sold 400 acres (1.6 km2) in 1871 to (Samuel) Frederick deBary, a wealthy wine merchant from New York City, and that same year he erected a hunting lodge. Called "DeBary Hall," the 8,000 square foot (700 m²), 20 room Italianate mansion featured a two-tiered veranda, stables, an ice-house and the state's first swimming pool, fed by a spring. Visitors included President Ulysses S. Grant and President Grover Cleveland. Over time he acquired an additional 9,000 acres (36 km2), planting orange groves and pecan trees. There is some debate as to whether this was actually the first pool in Florida, as a St. Augustine pool has also made the same claim. One possibility is that this was the first Spring-fed pool in the state (See Orlando Sentinel article).

In 1875, deBary bought a small steamboat, the George M. Bird, to transport his horses and dogs along the St. Johns River for hunting expeditions, and also to take fruit to market. He established the DeBary Merchants' Line in 1876, a steamship service contracted to carry mail between Jacksonville and Enterprise. It would acquire the sidewheeler Frederick DeBary. In 1883, the firm merged with the Baya Line, owned by Colonel H.T. Baya, to create the DeBary-Baya Merchants' Line, with 13 steamboats and a crew of 3,000 running to Sanford. The DeBary-Baya Merchants' Line sold its business in 1889 to the Clyde Line, which survived until 1928.

Frederick deBary died in 1898, and his mansion is today a restored museum, listed on the National Register of Historic Places in 1972. The estate, reduced to 10 acres (40,000 m2), now features the community's oldest building, the Arnett House. Incorporated in 1993, the City of DeBary is named for its noted settler. 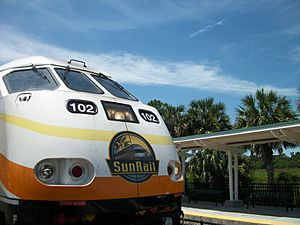 Public primary and secondary education is handled by Volusia County Schools. The one elementary school in DeBary is DeBary Elementary. Students attend middle and high schools in the nearby cities of Deltona and Orange City.

All content from Kiddle encyclopedia articles (including the article images and facts) can be freely used under Attribution-ShareAlike license, unless stated otherwise. Cite this article:
DeBary, Florida Facts for Kids. Kiddle Encyclopedia.