Volusia County ( və-LOO-shə) is located in the east-central part of the U.S. state of Florida, stretching between the St. Johns River and the Atlantic Ocean. As of the 2020 census, the county was home to 553,543 people, an increase of 11.9% from the 2010 census. It was founded on December 29, 1854, from part of Orange County, and was named for the community of Volusia, located in northwestern Volusia County. Its first county seat was Enterprise. Since 1887, its county seat has been DeLand. 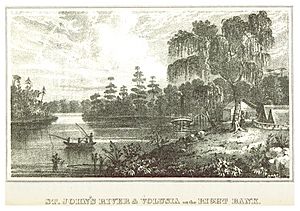 Volusia County was named after the then-largest-community, Volusia, when the Florida legislature divided Orange County on December 29, 1854. At the time, Volusia County had as few as 600 residents.

The origins of the word "Volusia" are unclear, though there are several theories:

The land area of present-day Volusia County was inhabited by the indigenous Timucua, and Mayaca people . Neither group exists today as distinct racial entities, having been decimated by war and disease after contact with European settlers. Evidence of their habitation can still be seen in various areas of Volusia County such as the large shell middens at Tomoka State Park.

During the British occupation of Florida, a failed colony was started in southeast Volusia County by Andrew Turnbull, known as New Smyrna. This colony was connected to St. Augustine, the capital of East Florida, via the Kings Road. After the failure of the colony the settlers, many of Minorcan and Greek heritage made the 70-mile (110 km) journey to live in St. Augustine.

The Seminole Indians, descendants of the Creek tribe of Alabama and Georgia who resisted forced relocation to Indian Territory also camped in various parts of Volusia County. During the Second Seminole War (1836–1842) a large sugar plantation in what is today the city of Daytona Beach was burned by the Seminole.

On the east shore of the St. Johns River in Volusia, in present-day DeBary, General Winfield Scott established a fort/depot in 1836 named Fort Florida. 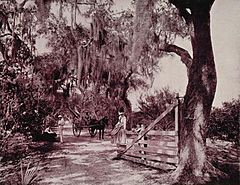 Avenue of Moss-Covered Oaks, Near Ormond, Florida -- an 1893 duotone print

Volusia County is bordered on the west by the St. Johns River and Lake Monroe, and by the Atlantic Ocean to the east. Roughly the size of Rhode Island, Volusia is situated 50 miles (80 km) northeast of Orlando, 60 miles (97 km) north of the Kennedy Space Center, and 89 miles (143 km) south of Jacksonville.

The Volusia County Government divides the county into three regions. This parallels the three calling regions used by BellSouth, the regional phone company:

East Volusia - also known as the Greater Daytona Beach Area, or the Halifax Area (named for the Halifax River which runs through the area), this region includes the cities of Daytona Beach, Daytona Beach Shores, Holly Hill, Ormond Beach, Ponce Inlet, Port Orange and South Daytona; and the surrounding unincorporated areas close to these cities.

Volusia County Public Transit System (VOTRAN) is the local Volusia County bus service. The buses offer service throughout the county, Monday through Saturday, from 7 a.m. to 7 p.m. and is handicapped-accessible. Limited service is offered in East Volusia in the evenings and on Sundays. The cost is $1.25 per trip, $3.00 for a one-day bus pass, or $40 for a 31-day pass (valid for all VOTRAN routes).

Passenger Train service to Volusia County is provided by Amtrak on the Silver Meteor and Silver Star routes. Service between Volusia County and Orlando is provided by SunRail, a commuter rail line running from Volusia to Orange County. The initial phase of the project commenced in 2014 and will extend service to as far north as DeBary. A planned expansion will include the DeLand Amtrak station in 2015.

The overall gross metro product (GMP) for Volusia County economy increased from $12.98 billion in 2005 to $13.69 billion in 2006; a $709.9 million increase. The GMP is an annual measurement of the total economic output and sales of goods and services provided within the metropolitan statistical area that comprises all of Volusia County and its 16 cities. A GMP of $13.69 billion represents a significant circulation of new capital resources in an economy populated by just over 500,000 residents.

Local consumer confidence and a continued immigration of an estimated 28,800 new residents, new capital investments for new construction exceeding $1.11 billion, and the steady growth of professional and health-care services continued to drive much of the county's economic viability.

Volusia County's manufacturing sector maintained a steady and stable position within the local economy contrary to the declining trends being experienced elsewhere within Florida. The overall number of manufacturers present within the county increased to over 430 in 2006 and accounted for a large portion of the county's GMP. Manufacturing maintains one of the highest of all average wage levels within the county and generates a higher rate of circulation of economic impact than any other business sector that comprises the local economy.

Public primary and secondary education is handled by Volusia County Schools. One of the larger private schools is Father Lopez Catholic High School.

All content from Kiddle encyclopedia articles (including the article images and facts) can be freely used under Attribution-ShareAlike license, unless stated otherwise. Cite this article:
Volusia County, Florida Facts for Kids. Kiddle Encyclopedia.