New Smyrna Beach is a city in Volusia County, Florida, United States, located on the central east coast of the state, with the Atlantic Ocean to the east. Its population is 30,142 in 2020 by the United States Census Bureau. The downtown section of the city is located on the west side of the Indian River and the Indian River Lagoon system. The Coronado Beach Bridge crosses the Intracoastal Waterway just south of Ponce de Leon Inlet, connecting the mainland with the beach on the coastal barrier island.

The surrounding area offers many opportunities for outdoor recreation; these include fishing, sailing, motorboating, golfing, and hiking. Visitors participate in water sports of all kinds, including swimming, scuba diving, kitesurfing, and surfing. In July 2009, New Smyrna Beach was ranked number nine on the list of "best surf towns" in Surfer. It was recognized as "one of the world's top 20 surf towns" by National Geographic. in 2012. It has also been dubbed "The Shark Bite Capital of the World."

The area was first settled by Europeans in 1768, when Scottish physician Dr. Andrew Turnbull, a friend of James Grant, the governor of British East Florida, established the colony of New Smyrna, named after the home town of his father-in-law. No one had previously attempted to settle so many people at one time in a town in North America.

Turnbull recruited about 1300 settlers, intending for them to grow hemp, sugarcane, and indigo, as well as to produce rum, at his plantation on the northeastern Atlantic coast of Florida. The majority of the colonists came from Minorca, one of the Mediterranean Balearic Islands of Spain, and were of Catalan culture and language. Around 500 or so came from Greece.

Although the colony produced relatively large amounts of processed indigo in its first few years of operation, it eventually collapsed after suffering major losses due to insect-borne diseases and Indian raids, and growing tensions caused by mistreatment of the colonists on the part of Turnbull and his overseers. The survivors, about 600 in number, marched nearly 70 miles north on the King's Road and relocated to St. Augustine, where their descendants live to this day. In 1783, East and West Florida were returned to the Spanish, and Turnbull abandoned his colony to retire in Charleston, South Carolina.

The St. Photios Greek Orthodox National Shrine on St. George Street in St. Augustine honors the Greeks among the settlers of New Smyrna; they were the first Greek Orthodox followers in North America. The historical exhibit adjoining the chapel tells the story of their plight, with accompanying exhibits, and of their contributions to the city.

Central Florida remained sparsely populated by white settlers well into the 19th century, and it was frequently raided by Seminole Indians trying to protect their territory. United States troops fought against them in the Seminole Wars, but they were never completely dislodged. During the Civil War in the 1860s, the "Stone Wharf" of New Smyrna was shelled by Union gunboats.

In 1887, when New Smyrna was incorporated, it had a population of 150. In 1892, Henry Flagler provided service to the town via his Florida East Coast Railway. This led to a rapid increase in the area's population. Its economy grew as tourism was added to its citrus and commercial fishing industries.

During Prohibition in the 1920s, the city and its river islands were popular sites for moonshine stills and hideouts for rum-runners, who came from the Bahamas through Mosquito Inlet, now Ponce de León Inlet. "New Smyrna" became "New Smyrna Beach" in 1947, when the city annexed the seaside community of Coronado Beach. Today, it is a resort town of over 20,000 permanent residents.

Like St. Augustine, established by the Spanish, New Smyrna has been under the rule of four "flags": the British, Spanish, United States (from 1821, with ratification of the Adams–Onís Treaty), and the Confederate Jack. After the end of the Civil War in 1865, it returned with Florida to the United States.

New Smyrna Beach's motto is cygnus inter anates, which is Latin for "a swan among ducks." The city is located in the so-called "Fun Coast" region of the state of Florida, a regional term created by the Daytona Beach/Halifax area Chamber of Commerce. This coincides with the local area code, 386, which spells FUN on touchtone phones. According to the United States Census Bureau, it has a total area of 37.8 square miles (98.0 km2). 34.6 square miles (89.7 km2) of it is land, and 0.31 square miles (0.8 km2) of it (8.46%) is covered by water. It is bordered by the city of Port Orange to the northwest, unincorporated Volusia County to the north, the census-designated place of Samsula-Spruce Creek to the west, and the cities of Edgewater and Bethune Beach and the Canaveral National Seashore to the south. Bounded on the east by the Atlantic Ocean, New Smyrna Beach is on the Indian River. The city is connected to other parts of the state by Interstate 95, U.S. Route 1, State Road 44, and State Road 442. 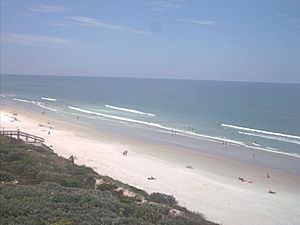 Like the rest of Florida north of Lake Okeechobee, New Smyrna Beach has a humid subtropical (Köppen Cfa) climate characterized by hot, humid summers and mild, mostly dry winters. The rainy season lasts from May until October, and the dry season, from November to April. New Smyrna averages only about four frosts per year, and many species of subtropical plants and palms are grown in the area. The city has recorded snowfall only three times in its 250-year history. The summers are long and hot, with frequent severe thunderstorms in the afternoon, as central Florida is the lightning capital of North America. Winters are pleasant with frequent sunny skies and dry weather.

Weather hazards include hurricanes from June until November, though direct hits are rare. Hurricane Charley exited over New Smyrna Beach on August 13, 2004, after crossing the state in a northeastern direction from its initial landfall in Punta Gorda. The storm caused extensive damage to the beachside portion of the city, and toppled many historic oak trees in the downtown area and along historic Flagler Avenue. 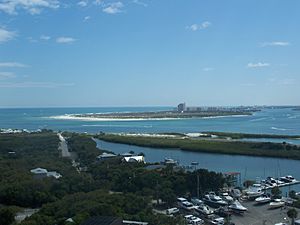 The population continues to increase with new condominium development. 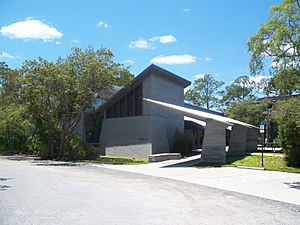 Atlantic Center for the Arts: Pabst Visitor Center and Gallery

Named one of "America's Top Small Cities for the Arts", New Smyrna Beach is home to the Atlantic Center for the Arts, an artists-in-residence community and educational facility, the Harris House, the Little Theatre, and a gallery of fine arts, Arts on Douglas. Arts shows featuring visual and performing arts occur throughout the year.

According to the International Shark Attack File maintained by the University of Florida, in 2007, Volusia County had more confirmed shark bites than any other region in the world. Experts from the university have referred to the county as having the "dubious distinction as the world's shark-bite capital". The trend continued in 2008, during which time the town broke its own record, with 24 shark bites. An Orlando Sentinel photographer shot a picture of a four-foot spinner shark jumping over a surfer, a reversal of "jumping the shark". Sharks bit three different surfers on September 18, 2016, in the span of a few hours at the same beach.

All public education is run by Volusia County Schools.

All content from Kiddle encyclopedia articles (including the article images and facts) can be freely used under Attribution-ShareAlike license, unless stated otherwise. Cite this article:
New Smyrna Beach, Florida Facts for Kids. Kiddle Encyclopedia.