St. Augustine (Spanish: San Agustín) is a city in the Southeastern United States, on the Atlantic coast of northeastern Florida. Founded in 1565 by Spanish explorers, it is the oldest continuously-inhabited European-established settlement in what is now the contiguous United States.

St. Augustine was founded on September 8, 1565, by Spanish admiral Pedro Menéndez de Avilés, Florida's first governor. He named the settlement "San Agustín", as his ships bearing settlers, troops, and supplies from Spain had first sighted land in Florida eleven days earlier on August 28, the feast day of St. Augustine. The city served as the capital of Spanish Florida for over 200 years. It was designated as the capital of British East Florida when the colony was established in 1763; Great Britain returned Florida to Spain in 1783.

Spain ceded Florida to the United States in 1819, and St. Augustine was designated the capital of the Florida Territory upon ratification of the Adams–Onís Treaty in 1821. The Florida National Guard made the city its headquarters that same year. The territorial government moved and made Tallahassee the capital of Florida in 1824.

The county seat of St. Johns County, St. Augustine is part of Florida's First Coast region and the Jacksonville metropolitan area. Since the late 19th century, St. Augustine's distinct historical character has made the city a tourist attraction.

Ray Charles Center and the Theodore Johnson Center, at the Florida School for the Deaf and Blind

The institution now known as Florida Memorial University was located in St. Augustine from 1918 to 1968, when it relocated to its present campus in Miami. Originally known as Florida Baptist Academy, then Florida Normal, and then Florida Memorial College, it was a historically black institution and had a wide impact on St. Augustine while it was located there. During World War II it was chosen as the site for training the first blacks in the U. S. Signal Corps. Among its faculty members was Zora Neale Hurston; a historic marker is placed at the house where she lived while teaching at Florida Memorial (and where she wrote her autobiography Dust Tracks on a Road.) 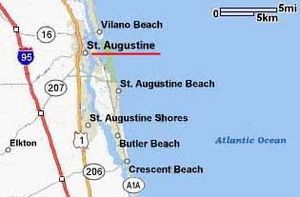 Bus service is operated by the Sunshine Bus Company. Buses operate mainly between shopping centers across town, but a few go to Hastings and Jacksonville, where one can connect to JTA for additional service across Jacksonville.

St. Augustine has one public airport 4 miles (6.4 km) north of the downtown. It has three runways and two seaplane lanes. There is currently no scheduled service to the Airport following ViaAir’s suspension of service to Charlotte in 2018. Various private jets and tour helicopters also operate from the airport. Northrop Grumman runs a large manufacturing plant on the grounds, where the E-2 Hawkeye is produced. Jacksonville International Airport is 40 miles to the north along I-95. 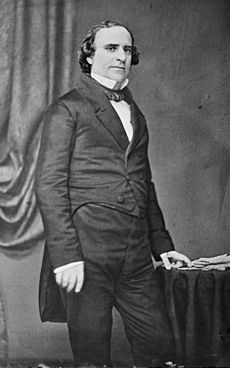 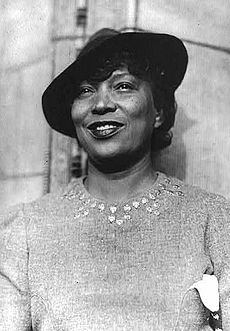 All content from Kiddle encyclopedia articles (including the article images and facts) can be freely used under Attribution-ShareAlike license, unless stated otherwise. Cite this article:
St. Augustine, Florida Facts for Kids. Kiddle Encyclopedia.