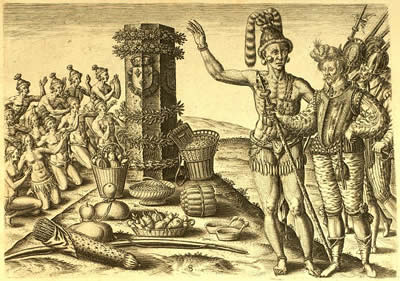 Jean Ribault (also spelled Ribaut) (1520 – October 12, 1565) was a French naval officer, navigator, and a colonizer of what would become the southeastern United States. He was a major figure in the French attempts to colonize Florida. A Huguenot and officer under Admiral Gaspard de Coligny, Ribault led an expedition to the New World in 1562 that founded the outpost of Charlesfort on Parris Island in present-day South Carolina. Two years later, he took over command of the French colony of Fort Caroline in what is now Jacksonville, Florida. He and many of his followers were massacred by Spanish soldiers near St. Augustine.

All content from Kiddle encyclopedia articles (including the article images and facts) can be freely used under Attribution-ShareAlike license, unless stated otherwise. Cite this article:
Jean Ribault Facts for Kids. Kiddle Encyclopedia.