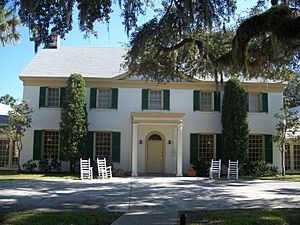 Fort George Island State Cultural Site is a Florida State Park located on Fort George Island, about three miles (5 km) south of Little Talbot Island State Park on SR A1A. It is home to the Ribault Inn Club, constructed in 1928 as a winter resort and now used as a visitor's center. The 46,000-acre (190 km2) Timucuan Ecological and Historic Preserve, in Jacksonville, Florida is nearby. Fort George has the highest point along the Atlantic coast south of Sandy Hook, New Jersey, and contains Timucua oyster shell mounds. The park is part of the Talbot Islands GEOpark complex.

The park contains features that represent distinct periods in history. During the early historical period Fort George Island was known as Alicamani. It was the location of the village of Alicamani, a major village of the Timucua chiefdom known as the Saturiwa. Timucua influence is noted by the presence of middens, large mounds consisting of massive quantities of shells and discarded food byproducts. On Fort George Island, the shells were primarily oysters. The island was later home to the Spanish mission of San Juan del Puerto, the primary mission to the Saturiwa.

Under British rule in 1765, colonists developed a plantation on the island. It is now known as Kingsley Plantation, after Zephaniah Kingsley, who held it for 25 years. The main house, kitchen and numerous slave quarters have survived.

Activities include off-road bicycling, hiking, boating, canoeing, kayaking, and fishing. Amenities include a 4.4-mile (7.1 km)-long loop bicycle trail, boat ramp, a 3-mile (4.8 km) hiking/biking trail, and a beach. The park is open from 8:00 am until sundown year-round.

All content from Kiddle encyclopedia articles (including the article images and facts) can be freely used under Attribution-ShareAlike license, unless stated otherwise. Cite this article:
Fort George Island Cultural State Park Facts for Kids. Kiddle Encyclopedia.