Port Royal is a town on Port Royal Island in Beaufort County, South Carolina, United States. Largely because of annexation of surrounding areas (including Parris Island), the population of Port Royal rose from 3,950 in 2000 to 10,678 in 2010, a 170% increase. As defined by the U.S. Census Bureau, Port Royal is included within the Hilton Head Island-Bluffton-Beaufort, SC Metropolitan Statistical Area. Port Royal is home to Marine Corps Recruit Depot Parris Island and Naval Hospital Beaufort.

Port Royal takes its name from the adjacent Port Royal Sound, which was explored and named by Frenchman Jean Ribault in 1562. Ribault founded the short-lived settlement of Charlesfort on Parris Island. The area later became the site of a Spanish and still later Scottish colony during the 17th century.

Port Royal was the site of the Naval Battle of Port Royal during the Civil War. Later during the war, it was the one of the sites of the Port Royal Experiment, which included most of the Sea Islands in Union hands. In 1863, the Emancipation Proclamation was first read at Christmas under the Proclamation tree in Port Royal.

Due to the benefits of a large and sheltered natural harbor, Port Royal was able to develop port facilities to support the growing phosphate mining activities after the Civil War. The Port Royal Railroad was completed from Port Royal to a junction with the main Charleston and Savannah Railway in Yemassee, thus establishing a land route for trade and commerce. Development of a community around the previously isolated port site at the end of the Beaufort River and Battery Creek led to the platting of streets and town lots by development interests. A land rush ensued, and Port Royal was officially incorporated in 1874, 300 years after initial settlement efforts.

The Sea Islands Hurricane of 1893 destroyed much of the phosphate industry and stunted development, but the port continued to operate throughout the 20th century. The opening of Parris Island as a Marine Corps recruiting station brought some vitality back to the community, though rapid residential growth did not occur until the later decades of the 20th century. The port's vitality however began to decline as the State of South Carolina began to focus on dredging Charleston's harbor and expanding port facilities further up the coast. In an effort to save costs, the State Ports Authority closed the port facility in Port Royal in 2004. Efforts to redevelop have been ongoing but been hampered by the Great Recession. 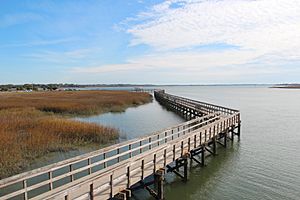 Historically, Port Royal's municipal boundaries were defined by Beaufort to the north, the Beaufort River to the east, Parris Island to the south, and Battery Creek to the west. Since the start of the 21st century however, Port Royal began to aggressively annex lands west and south of its core area, prompting controversy. Port Royal annexed Parris Island Marine Corps Base on October 11, 2000, effectively doubling the municipal population overnight due to on-base housing. Port Royal also annexed properties in the Shell Point and Burton areas of Beaufort County.

Challenges were filed, and the 2000 annexation of undeveloped Rose Island was to be heard by the South Carolina Supreme Court in 2005. Town representatives said the city annexed Rose Island because it was within the "line of sight" of the Doggett Tract, a group of islands off Shell Point already under the town's jurisdiction.

In 2006, Port Royal annexed two tracts of land south of the Broad River based on the so-called line-of-sight rule.

The hurricane scene from the 1994 film Forrest Gump was filmed in the town's dock area. 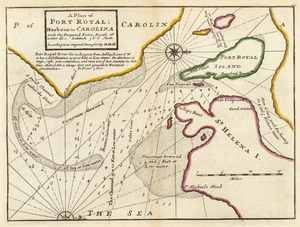 Herman Moll: A Plan of Port Royal-Harbour in Carolina, 1736

Port Royal has expanded in recent times by annexation of parcels of land on the west side of Battery Creek.

Port Royal is served by U.S. Highway 21, and S.C. Highways 128, 170, and 281. The Marine Corps Crossing Bridge (U.S. 21) connects the Old Village with Parris Island and newly annexed areas in the Shell Point area. Port Royal was previously the terminus for the Port Royal Railroad, which is being converted to the Spanish Moss Trail, a 14.9 mile rail trail connecting the town with Beaufort and other communities to the north.

All content from Kiddle encyclopedia articles (including the article images and facts) can be freely used under Attribution-ShareAlike license, unless stated otherwise. Cite this article:
Port Royal, South Carolina Facts for Kids. Kiddle Encyclopedia.