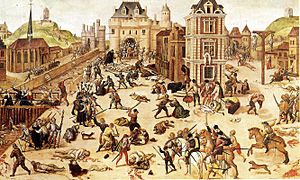 A contemporary painting of the St. Bartolomew day's massace

The French Wars of Religion is the name for a total of eight wars fought in France, in the 16th century. The wars opposed Catholics and Protestants. The protestants were also called huguenots. The Catholics won, ending with the St. Bartholomew's Day massacre, committed in the night between 23rd and 24th August 1572. Peace was strengthened with the Treaty of Nantes in 1598.

Even though these wars are called wars of religion, religion only played a small part, power politics were also important. These wars were the last attempt of regional rulers against the centralized power of the monarchy.

All content from Kiddle encyclopedia articles (including the article images and facts) can be freely used under Attribution-ShareAlike license, unless stated otherwise. Cite this article:
French Wars of Religion Facts for Kids. Kiddle Encyclopedia.