Treaty of Nantes facts for kids 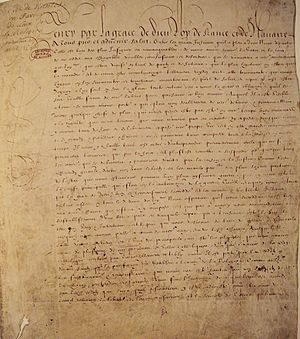 The Treaty of Nantes (also called the Edict of Nantes or Edict of Nantz) allowed Protestants a limited freedom of religion in France. It was made official on April 13, 1598. The purpose was to make peace after the French Wars of Religion.

King Louis XIV revoked the Edict of Nantes and made Catholicism the religion of France in 1685. This made many Huguenots (French Protestant)s leave.

The government declared that no one could believe in any religion except Roman Catholicism. Anyone joining in a Protestant service could die. Because of this, many Huguenots died for their faith. Some, though, gave up and became Roman Catholics. Others, refusing to stop being Protestants, ran away from France.

Louis XIV was horrified when he lost the Huguenots. They were among the most skilled workers in France. Many bankers, weavers, and merchants were Huguenots. Louis XIV ordered that France's borders be closed, and said that nobody could leave the country without his permission. However, Protestants still found ways to escape. Some hid in barrels on ships sailing away from France. Others disguised themselves as peasants and escaped. All together, probably more than two hundred thousand Huguenots ran away.

Protestant countries in Europe were glad to have such hard-working subjects: over a third of the Huguenots went to the Netherlands. From there many of them went to the Dutch colony at the Cape of Good Hope. Many went to England, and from there to America, especially Virginia and the Carolinas.

These immigrants were very valuable to their new home countries. They were hard working, obedient, and talented. They also brought many secrets of French manufacturing with them: for example, they introduced silk production to the rest of Europe.

All content from Kiddle encyclopedia articles (including the article images and facts) can be freely used under Attribution-ShareAlike license, unless stated otherwise. Cite this article:
Treaty of Nantes Facts for Kids. Kiddle Encyclopedia.