Jean Cauvin, also Jean Calvin (John Calvin in English) (July 10, 1509 – May 27, 1564), was a French Protestant theologian during the Protestant Reformation and was a central developer of the system of Christian theology called Calvinism or Reformed theology. In Geneva, he rejected Papal authority, established a new scheme of civic and ecclesiastical governance. He is famous for his teachings and writings and infamous for his role in the execution of Michael Servetus. 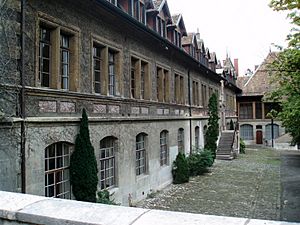 The Collège Calvin is now a college preparatory school

In 1523, Calvin's father, a lawyer, sent his fourteen-year-old son to the University of Paris to study humanities and law. By 1532, he had attained a Doctor of Law degree at Orléans. Calvin was trained to be a lawyer. He studied under some of the best legal minds of the Renaissance in France.

His training was important for Calvin because, once convinced of Evangelicalism, he applied these methods to the Bible. He molded his thinking along biblical lines, and he labored to preach and teach what he believed the Bible taught.

In 1536, he settled in Geneva, Switzerland. After being expelled from the city, he served as a pastor in Strasbourg from 1538 until 1541, before returning to Geneva, where he lived until his death in 1564. 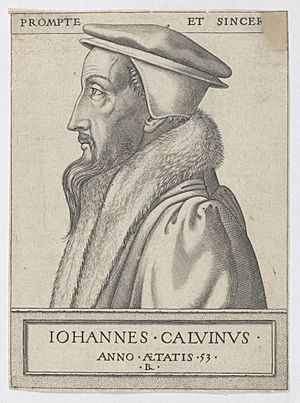 John Calvin when he was 53 years

Calvin's power was very great in his last years. He was known all around the world as a reformer different from Martin Luther. Mainly, Luther and Calvin respected each other.

Calvin's greatest help to the English-speaking people was by giving Marian exiles in Geneva protection. He did this starting in 1555. With the city's protection, they could make their own reformed church under John Knox and William Whittingham. They later carried many of Calvin's ideas back to England and Scotland.

However, Calvin was most interested in trying to change his homeland, France. He helped the building of churches by giving out literature and offering ministers. Between 1555 and 1562, over one hundred ministers were sent to France.

Inside Geneva, Calvin mainly wanted to make a collège, a school for children. A place to build the school was picked on 25 March 1558. It was opened the next year on 5 June 1559. It was divided into two parts. One part was a grammar school. The other part was an advanced school.

In five years there were 1,200 students in the grammar school and 300 in the advanced school. The collège later became the Collège Calvin, one of the college preparatory schools of Geneva. The académie became the University of Geneva. 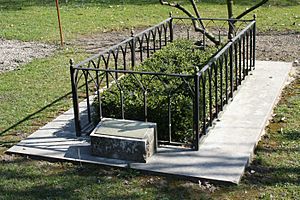 Traditional grave of Calvin in the Cimetière de Plainpalais in Geneva

He preached his last sermon in St. Pierre on 6 February 1564. On 25 April, he made his will. In his will, he left a little money to his family and to the collège. A few days later, the ministers of the church came to visit him. He said his last goodbye before dying of cancer.

Calvin died on 27 May 1564. He was 54. On the next day, he was buried in an unmarked grave in the Cimetière de Plainpalais. People are not sure where the grave is exactly. However, a stone was added in the 19th century to mark a grave traditionally thought to be Calvin's.

All content from Kiddle encyclopedia articles (including the article images and facts) can be freely used under Attribution-ShareAlike license, unless stated otherwise. Cite this article:
John Calvin Facts for Kids. Kiddle Encyclopedia.