Fort Mose Historic State Park (originally known as Gracia Real de Santa Teresa de Mosé) is a U.S. National Historic Landmark (designated as such on October 12, 1994), located two miles north of St. Augustine, Florida, on the edge of a salt marsh on the western side of the waterway separating the mainland from the coastal barrier islands. The original site of the 18th-century fort was uncovered in a 1986 archeological dig. The 24-acre (9.7 ha) site is now protected as a Florida State Park, administered through the Anastasia State Recreation Area. Fort Mose is the "premier site on the Florida Black Heritage Trail."

In 1738, the Spanish governor of Florida, Manuel de Montiano, had Fort Mose (pronounced "Moh-say") built and established as a free black settlement, the first to be legally sanctioned in what would become the territory of the United States. The fort has also been known as Fort Moosa or Fort Mossa, variants of the Spanish pronunciation. 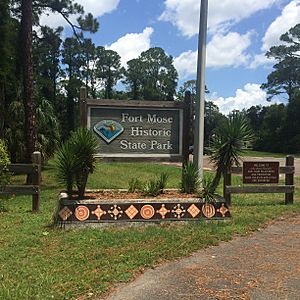 A panorama of the hammocks and salt marsh at the site of Fort Mose.

As early as 1687, the Spanish government had begun to offer asylum to slaves from British colonies. In 1693, the Spanish Crown officially proclaimed that runaways would find freedom in Florida, in return for converting to Catholicism and a term for men of four years' military service to the Crown. In effect, Spain created a maroon settlement in Florida as a front-line defense against English attacks from the north. Spain also intended to destabilize the plantation economy of the British colonies by creating a free black community to attract slaves seeking escape and refuge from the British slavery.

In 1738, Governor Manuel de Montiano, ordered construction of the Gracia Real de Santa Teresa de Mosé military fort about 2 miles north of St. Augustine. Slaves escaped from the British colonies were directed there. They were recognized as free, and men who passed inspection were taken into the Spanish militia and placed into service. The military leader at the fort, who also served as mayor of the community, was an African-European Creole, baptized as Francisco Menendez. He became established as a leader when helping the defense of St. Augustine in 1727. Fort Mose was the first free African settlement legally sanctioned in what would become the United States and had a total population of about 100. The village had a wall around it, with dwellings inside, plus a church and an earthen fort.

Word of the settlement reached the colonies of South Carolina and Georgia to the north, attracting escaping slaves. Charlestown was approximately 200 miles north of the Florida border. The attraction of Fort Mose is believed to have helped inspire the Stono Rebellion in September 1739. This was led by slaves who were "fresh from Africa." During the Stono revolt, several dozen Africans believed to be from the Kingdom of Kongo tried unsuccessfully to reach Spanish Florida. Some did make it, where they rapidly adjusted to life there, as they were already baptized Catholics (Kongo was a Catholic nation) and spoke Portuguese.

Following the murder of some inhabitants at the fort by British Indian allies, Montiano ordered it abandoned and its inhabitants resettled in St. Augustine. In 1740, British forces led by James Oglethorpe of Georgia attacked and captured the fort in the Siege of Fort Mose. During the ensuing conflict, a Floridian force consisting of Spanish troops, Indian auxiliaries, and free black militia counterattacked Oglethorpe's troops and defeated them decisively, destroying the fort in the process. Oglethorpe was eventually forced to withdraw his forces to Georgia. Because the fort was destroyed, its inhabitants stayed in St. Augustine. By 1752, the Spanish had rebuilt Fort Mose. The new governor forcibly relocated most of the free blacks back into the defensive settlement, from the more cosmopolitan, multilingual culture of St. Augustine.

After East Florida was ceded to the British in the Peace of Paris of 1763, most of the free black inhabitants migrated to Cuba with the evacuating Spanish settlers. At that time, the black population at St. Augustine and Fort Mose totaled about 3,000, of whom about one-quarter were free.

A haven for escaped slaves from the British colonies to the north, Fort Mose is considered the "premier site on the Florida Black Heritage Trail." The National Park Service highlights it as a precursor site of the Underground Railroad. This was the network in the antebellum years preceding the American Civil War by which slaves escaped to freedom, most often to the North and Canada, but also to the Bahamas and Mexico.

An archeological excavation in 1986 revealed the site of the original Fort Mose, as well as the second facility constructed in 1752. Today, artifacts are displayed in the museum within the visitor center at the park. On the grounds, interpretive panels are used to illustrate the history of the site. Three replicas of historic items have been installed within the park: a chosa or a cooking hut, a small historic garden, and a small Spanish flat boat called a barca chata.

All content from Kiddle encyclopedia articles (including the article images and facts) can be freely used under Attribution-ShareAlike license, unless stated otherwise. Cite this article:
Fort Mose Historic State Park Facts for Kids. Kiddle Encyclopedia.