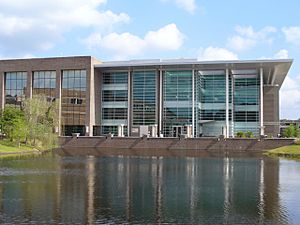 The Thomas G. Carpenter Library which is on the campus

The University of North Florida (UNF) is a public university in Jacksonville, Florida. The university has about 16,509 students. Its campus comprises 1,300 acres amid a natural preserve on Jacksonville's Southside. It was founded in 1969. The current president is David Szymanski.

UNF was established in 1965 and began offering classes in 1972. UNF was initially designated an upper division college for juniors and seniors. It began admitting freshmen in 1984.

The university has 220 clubs and organizations for students as well as an active student government and Greek life. The student-run newspaper The Spinnaker is published monthly. The university's intercollegiate athletics teams are known as the Ospreys, and are currently members of the Atlantic Sun Conference in NCAA Division I.

The university was founded in 1969 after 1,000 acres (4.0 km2) midway between downtown Jacksonville and the Jacksonville Beaches were set aside for the campus, 500 acres (2.0 km2) of which were donated by the Skinner family of Jacksonville. Construction on classrooms and buildings began in 1971 and UNF opened in the fall of 1972 with an initial enrollment of 2,027 juniors, seniors and graduate students, supported by 117 faculty and more than 150 staff. Originally, like the other Florida state institutions opened around this time, UNF was designated as a "senior" college, meaning that it would enroll only upperclassmen and graduate students.

The athletics teams of the university are called the Ospreys. They have 10 varsity teams. They compete in the Atlantic Sun Conference.

All content from Kiddle encyclopedia articles (including the article images and facts) can be freely used under Attribution-ShareAlike license, unless stated otherwise. Cite this article:
University of North Florida Facts for Kids. Kiddle Encyclopedia.