Province of Georgia facts for kids

The Province of Georgia (also Georgia Colony) was one of the Southern colonies in British America. It was the last of the thirteen original American colonies established by Great Britain in what later became the United States. In the original grant, a narrow strip of the province extended to the Pacific Ocean.

The colony's corporate charter was granted to General James Oglethorpe on April 21, 1732, by George II, for whom the colony was named. The charter was finalized by the King's privy council on June 9, 1732.

Oglethorpe envisioned a colony which would serve as a haven for English subjects who had been imprisoned for debt and "the worthy poor". General Oglethorpe imposed very strict laws that many colonists disagreed with, such as the banning of alcoholic beverages. He disagreed with slavery and thought a system of smallholdings more appropriate than the large plantations common in the colonies just to the north. However, land grants were not as large as most colonists would have preferred.

Another reason for the founding of the colony was as a buffer state and a "garrison province" which would defend the southern British colonies from Spanish Florida. Oglethorpe imagined a province populated by "sturdy farmers" who could guard the border; because of this, the colony's charter prohibited slavery. The ban on slavery was lifted by 1751 and the colony became a royal colony by 1752.

Oglethorpe's original plan had called for Georgia to be established as a safe home for those who had been imprisoned as debtors. The following is an historical accounting of these first English settlers sent to Georgia:

"A committee was appointed to visit the jails and obtain the discharge of such poor prisoners as were worthy, carefully investigating character, circumstances and antecedents."
"Thirty-five families, numbering one hundred and twenty persons, were selected."
"On the 16th of November, 1732, the emigrants embarked at Gravesend on the ship Anne ... arriving January 13th [1733] in the harbor of Charleston, S. C. ..."
"They set sail the day following ... into Port Royal, some eighty miles southward, to be conveyed in small vessels to the river Savannah."

Oglethorpe continued up the river to scout a location suitable for settlement. On February 12, 1733, Oglethorpe led the settlers to their arrival at Yamacraw Bluff, in what is now the city of Savannah, and established a camp with the help of a local elderly Creek chief, Tomochichi. A Yamacraw Indian village had occupied the site, but Oglethorpe arranged for the Indians to move. The day is still celebrated as Georgia Day.

The original charter specified the colony as being between the Savannah and Altamaha Rivers, up to their headwaters (the headwaters of the Altamaha are on the Ocmulgee River), and then extending westward "to the south seas." The area within the charter had previously been part of the original grant of the Province of Carolina, which was closely linked to Georgia. 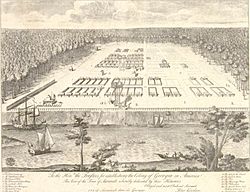 The Privy Council approved the establishment charter on June 9, 1732, and for the next two decades the council of trustees governed the province, with the aid of annual subsidies from Parliament. However, after many difficulties and the departure of Oglethorpe, the trustees proved unable to manage the proprietary colony, and on June 23, 1752, they submitted a deed of reconveyance to the crown, one year before the expiration of the charter. On January 7, 1755, Georgia officially ceased to be a proprietary colony and became a crown colony.

Following Britain’s victory in the French and Indian War, King George III issued the Proclamation of 1763. One of its provisions was to extend Georgia’s southern boundary from the Altamaha River to the St. Marys River. Two years later, on March 25, 1765, Gov. James Wright approved an act of the General Assembly creating four new parishes St. David, St. Patrick, St. Thomas, and St. Mary—in the newly acquired land, and further assigning Jekyll Island to St. James Parish. In 1777, the original eight counties of the State of Georgia were created.

In practice, settlement in the colony was limited to the near vicinity of the Savannah River. The western area of the colony remained under the control of the Creek Indian Confederation until after the American Revolutionary War.

In the beginning, the colony had a sluggish start. James Oglethorpe did not allow liquor, and colonists who came at the trustees' expense were not allowed to own more than 50 acres (0.20 km2) of land for their farm in addition to a 60 foot by 90 foot plot in town. Those who paid their own way could bring ten indentured servants and would receive 500 acres of land. Additional land could neither be acquired nor sold.

Discontent grew in the colony because of these restrictions, and so Oglethorpe lifted them. With slavery, liquor, and land acquisition the colony improved much faster. Slavery had been permitted from 1749. There was some internal opposition, particularly from Scottish settlers, but by the time of the War of Independence, Georgia was much like the rest of the South.

On April 24, 1802, Georgia ceded to Congress parts of its western territories. These became the Mississippi Territory and later (with other adjoining lands) the states of Alabama and Mississippi.

All content from Kiddle encyclopedia articles (including the article images and facts) can be freely used under Attribution-ShareAlike license, unless stated otherwise. Cite this article:
Province of Georgia Facts for Kids. Kiddle Encyclopedia.