History of Alabama facts for kids 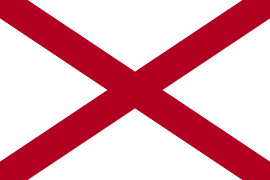 The history of what is now Alabama stems back thousands of years ago when it was inhabited by indigenous peoples. The Woodland period spanned from around 1000 BCE to 1000 CE, and was marked by the development of the Eastern Agricultural Complex. This was followed by the Mississippian culture of Native Americans, which lasted to around the 1600 CE. The first Europeans to make contact with Alabama were the Spanish, with the first permanent European settlement being Mobile, established by the French in 1702.

After being apart of the Mississippi Territory (1798–1817) and then the Alabama Territory (1817–1819), Alabama would became a U.S. state on December 14, 1819. After Indian Removal forcibly displaced most Southeast tribes to west of the Mississippi River to what was then called Indian Territory (now Oklahoma), European Americans arrived in large numbers, with some of them bringing or buying African Americans in the domestic slave trade.

The state's wealthy planter class considered slavery essential to their economy. As one of the largest slaveholding states, Alabama was among the first six states to secede from the Union. It declared its secession in January 1861 and joined the Confederate States of America in February 1861. During the ensuing American Civil War (1861–1865) Alabama had moderate levels of warfare. The state would suffer economic losses and hardships as a result of the war. Lincoln's Emancipation Proclamation in 1863 freed all remaining enslaved people. The Southern capitulation in 1865 ended the Confederate state government. Alabama then transitioned into the Reconstruction era (1865–1877). During that time, its biracial government established the first public schools and welfare institutions in the state.

For a half century after the Civil War, Alabama was mostly economically poor and heavily rural, with cotton production being the main economic driver. Most farmers were tenant, sharecroppers or laborers who did not own land. Reconstruction ended when Democrats, calling themselves "Redeemers" regained control of the state legislature by both legal and extralegal means (including violence and harassment). In 1901, Southern Democrats passed a state Constitution that effectively disfranchised most African Americans (who in 1900 comprised more than 45 percent of the state's population), as well as tens of thousands of poor whites in the state. By 1941, a total 600,000 poor whites and 520,000 African Americans had been disfranchised.

African Americans living in Alabama in the early-to-mid 20th century experienced the inequities of disfranchisement, segregation, violence and underfunded schools. Tens of thousands of African Americans from Alabama joined the Great Migration out of the South from 1915 to 1930 and moved for better opportunities in industrial cities, mostly in the North and Midwest. The black exodus escalated steadily in the first three decades of the 20th century; 22,100 emigrated from 1900 to 1910; 70,800 between 1910 and 1920; and 80,700 between 1920 and 1930. As a result of African American disenfranchisement and rural white control of the legislature, state politics were dominated by Democrats, as part of the "Solid South."

The Great Depression of the 1930s would hit Alabama's state economy hard. New Deal farm programs helped increase the price of cotton, bringing some economic relief. During and after World War II, Alabama started to see some economic prosperity, as the state developed a manufacturing and service base. Cotton would fade in economic importance with mechanization technologies and the reduced need for farm labor. Following years of struggles, the passage of the Civil Rights Act of 1964 and Voting Rights Act of 1965 abolished segregation, along with African Americans being able to again exercise their constitutional right to vote.

During the mid-to-late 20th century, the formation of NASA's Marshall Space Flight Center in Huntsville, Alabama, would help the states economic growth by developing an aerospace industry. In 1986, the election of Guy Hunt as governor marked a shift in Alabama toward becoming a Republican stronghold in Presidential elections; as its voters also leaned Republican in statewide elections. The Democratic Party still dominated many local and legislative offices, but total Democrat dominance had ended. In the early 21st century, Alabama's economy was fueled in part by aerospace, agriculture, auto production, and the service sector.

All content from Kiddle encyclopedia articles (including the article images and facts) can be freely used under Attribution-ShareAlike license, unless stated otherwise. Cite this article:
History of Alabama Facts for Kids. Kiddle Encyclopedia.