Flag of Alabama facts for kids

The current flag of the state of Alabama (the second in Alabama state history) was adopted by Act 383 of the Alabama state legislature on February 16, 1895:

The cross of St. Patrick referred to in the law is a diagonal cross, known in vexillology as a saltire. Because the bars must be at least six inches wide, small representations of the Alabama flag do not meet the legal definition. 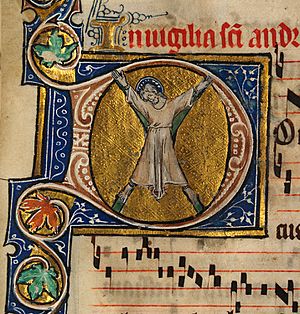 St Andrew crucified on a diagonal cross. From a 14th-century manuscript 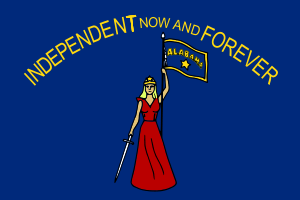 Obverse of the 1861 flag of Alabama 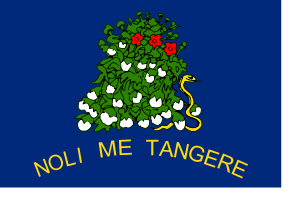 Reverse of the 1861 flag of Alabama

On January 11, 1861, the Alabama Secession Convention passed a resolution designating an official flag. Designed by several women from Montgomery, final touches were made by Francis Corra of that city. One side of the flag displayed the Goddess of Liberty holding an unsheathed sword in her right hand; in her left she held a small blue flag with one gold star. Above the gold star appears the text "Alabama" in all capital letters. In an arch above this figure were the words "Independent Now and Forever". The reverse side of the flag had a cotton plant with a coiled rattlesnake. The text "Noli Me Tangere", ("Touch Me Not" in Latin), was placed below the cotton plant.

This flag was sent to the governor's office on February 10, 1861. Due to damage from severe weather, the flag was never flown again.

Alabama's current flag was adopted in 1895. The legislation introduced by Representative John W. A. Sanford Jr. stipulates that "[t]he flag of the state of Alabama shall be a crimson cross of St. Andrew on a field of white. The bars forming the cross shall be not less than six inches broad, and must extend diagonally across the flag from side to side." Sanford's father, John W. A. Sanford, had commanded the 60th Alabama Infantry Regiment during the U.S. Civil War and he modeled his design on the battle flag used by that regiment. The design of that regimental flag was a white saltire over a blue field with a circle of white stars surrounding the crossing. It had been adopted from the flag of Hilliard's Legion of Alabama Volunteers which was raised in 1862 and dissolved after the Battle of Chickamauga with parts of its 1st and 3rd battalions entering the 60th Alabama Infantry. The regimental flag accompanied them through the end of the war and was surrendered at Appomattox Courthouse.

The saltire of Alabama's flag most closely resembles the saltire of the flag of Florida, which has its heritage in the Spanish Cross of Burgundy. Southern Alabama was originally part of Spanish Florida and subsequently West Florida. Although Alabama's adoption of its flag design predates that of Florida's by five years (1895), the 1868–1900 Seal of Florida depicted a white flag with a red saltire, similar to Florida's current flag or a Burgundian saltire, on top of a steamboat. Alabama's flag is officially a St. Andrew's cross as described in its legislation, and so is the Cross of Burgundy (Spanish: Cruz de Borgoña, Cruz de San Andrés), representing the cross on which St. Andrew was crucified.

It is sometimes believed that the crimson saltire of the current flag of Alabama was designed to resemble the blue saltire of the Confederate Battle Flag. Many battle flags were square, and the flag of Alabama is sometimes also depicted as square. The legislation that created the state flag did not specify that the flag was to be square, however. The authors of a 1917 article in National Geographic expressed their opinion that because the Alabama flag was based on the Battle Flag, it should be square. In 1987, the office of Alabama Attorney General Don Siegelman issued an opinion in which the derivation from the 60th Alabama Battle Flag is indicated, and also concluded that the proper shape is rectangular, as it had been depicted numerous times in official publications and reproductions; despite this, the flag is still often depicted as being square, even in official publications of the U.S. federal government. 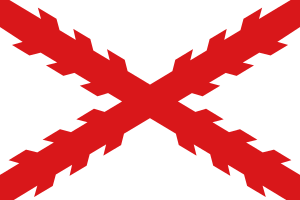 The Spanish Cross of Burgundy, used in southern Alabama until the 1800s 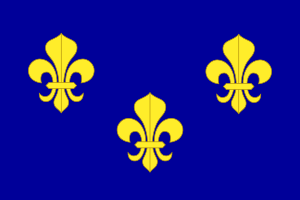 The French royal standard, used in western Alabama until the 1800s

Another remote, but possible inspiration was the flag carried by Co. "F", 7th Alabama Cavalry. The regiment was the only Alabama regiment in Rucker's Brigade, commanded by Col. Edmund Rucker of Tennessee (later Alabama), who became a prominent Birmingham businessman after the war. The flag of Rucker's brigade utilized a white background with a red saltire charged with 13 blue/green stars. This flag was given to Co. "F", 7th Alabama Cavalry by Rucker so that they might act as his Color Guard, and is held by the Alabama Department of Archives and History as part of its Alabama Civil War Period Flag Collection. But the flag carried by Co. F 7th Alabama was not an Alabama flag, it was the flag made for Rucker's Brigade a month before the 7th joined his brigade; the 7th was color party only after September 24, 1864. A bunting flag that exists, in the white and red configuration with 13 blue stars, is not believed to be Alabama-associated, but rather to be tied to Rucker's Brigade, as well.

According to historian John M. Coski, the adoption of Alabama's flag coincided with the rise of Jim Crow laws and segregation, as other former Confederate slave states, such as Mississippi and Florida, also adopted new state flags based off Confederate designs around the same time when those states instituted Jim Crow segregation laws themselves:

The flag changes in Mississippi, Alabama, and Florida coincided with the passage of formal Jim Crow segregation laws throughout the South. Four years before Mississippi incorporated a Confederate battle flag into its state flag, its constitutional convention passed pioneering provisions to 'reform' politics by effectively disenfranchising most African Americans.

The flag of the governor of Alabama is a variant of the state flag. In the top saltire, the flag displays the state coat of arms. The bottom saltire contains the state military crest which consists of a cotton plant with full bursting boll.

All content from Kiddle encyclopedia articles (including the article images and facts) can be freely used under Attribution-ShareAlike license, unless stated otherwise. Cite this article:
Flag of Alabama Facts for Kids. Kiddle Encyclopedia.