Secession in the United States facts for kids 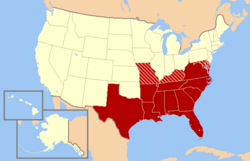 The states in solid red seceded from the Union to form the Confederate States of America, while the striped states were Border States that remained with the Union

Secession in the United States refers mainly to state secession. It applies to the outbreak of the American Civil War when on December 20, 1860, South Carolina officially declared their secession from the United States. It was followed four months later by the states of Georgia, Florida, Alabama, Mississippi, Texas and Louisiana. These initial seven seceding states formed the Confederate States of America based in Montgomery, Alabama. Then, on April 12, 1861, hostilities began at Fort Sumter in Charleston, South Carolina. After this, the states of Virginia (except the northwestern counties), Arkansas, Tennessee, and North Carolina joined the Confederacy. The capital was then moved Richmond, Virginia. The Northern and Border states remained with the Union.

In 1860, secession was not a new threat. It had been discussed as early as 1776 when the Continental Congress wanted to tax all of the colonies based on a population count that included slaves. South Carolina threatened to separate themselves from the other 12 colonies over the issue. From then until the outbreak of the American Civil War, anytime a minority sectional dispute came up (often over slavery) the threat of secession would be used. It was a matter of concern when the Constitutional Convention met in 1787 in Philadelphia. Secession was closely tied to the thinking of members of the Whig party. Their thinking was that rebellion (such as in 1776) was a right of a state against any form of despotic government.

When the South seceded in 1860-61, one argument was that in 1776, when the thirteen Colonies rebelled against Great Britain, it was a secession. Others argued the two situations were very different. The thirteen colonies revolted against Great Britain, they did not secede from it. What resulted was the American Revolutionary War. Each of the colonies was regarding itself as a sovereign state and was waging a war of independence in cooperation with twelve other sovereign nations.

Following the war, scholars disagreed on what caused the Civil War. The disagreements still go on today. Many said that slavery was the main cause of the war. The Southern states wanted to continue it while the Northern states wanted to stop it. Others say slavery was not the main issue. They point to states' rights and taxation as leading causes.

Each state that seceded wrote an "Article of Secession" formally declaring they were leaving the Union. Four states, Texas, Mississippi, Georgia and South Carolina, added a "Declarations of Causes." These were written to explain the reasons for leaving in more detail.

Georgia gave the following reasons why they were dissolving their connections to the United States. These included:

In their declaration of causes, Mississippi wrote that slavery was necessary for their commerce. They added, only the black man can work in our hot climate. The North gives us only two choice: either abolishing slavery and suffering complete ruin or seceding from the Union. Included in their reasons were:

South Carolina gave its reasons for seceding in its Declaration of Immediate Causes which was adopted on 24 December 1860. The reasons included:

Texas became a state on December 29, 1845 with the assurances of becoming an equal state in the Union and was accepted with her own constitution. That constitution protected and maintained the institution known as slavery. Texas gave up a being a sovereign country to join the United States to promote the welfare, security and liberty of her people. Her declaration of causes included:

All content from Kiddle encyclopedia articles (including the article images and facts) can be freely used under Attribution-ShareAlike license, unless stated otherwise. Cite this article:
Secession in the United States Facts for Kids. Kiddle Encyclopedia.