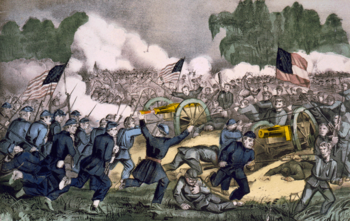 A timeline of events leading up to the American Civil War describes the events which historians recognize as contributing to the American Civil War. Many of these events lead back to the founding of the country. The United States Constitution makes only a few mentions of slavery leaving it largely up to the individual states to govern it. As the Northern and Southern United States developed along separate lines, slavery eventually disappeared from the North. It became an institution in the South. As new parts of the country opened up to settlement the issues over slavery started a long-standing controversy between North and South. It became a burning issue and led to secession of several Southern states. This in general led to the Civil War.

Key events that triggered the war

All content from Kiddle encyclopedia articles (including the article images and facts) can be freely used under Attribution-ShareAlike license, unless stated otherwise. Cite this article:
Timeline of events leading to the American Civil War Facts for Kids. Kiddle Encyclopedia.