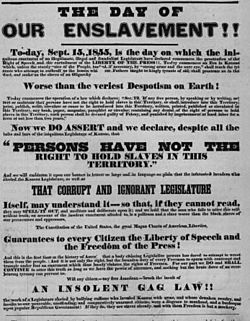 Bleeding Kansas was a border war on the Kansas-Missouri border. It began with the Kansas–Nebraska Act of 1854 and lasted into the American Civil War (1854–1861). It was an ugly war between groups of people who held strong opinions both for and against slavery. The term was first coined by Horace Greeley of the New York Tribune. He used it to describe the violence happening in the Kansas territory during the mid to late 1850s. Three distinct groups were fighting for power in Kansas at the time. These were those who were pro-slavery, abolitionists and free-staters. Bloody Kansas, fought over the issue of slavery, was a precursor of events to come in the American Civil War.

All content from Kiddle encyclopedia articles (including the article images and facts) can be freely used under Attribution-ShareAlike license, unless stated otherwise. Cite this article:
Bleeding Kansas Facts for Kids. Kiddle Encyclopedia.