Kansas in the American Civil War facts for kids 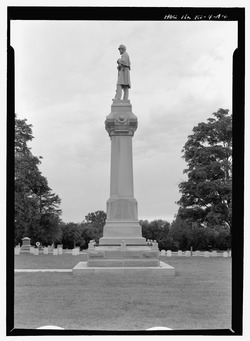 Monument commemorating the Battle of Baxter Springs in Kansas

At the start of the American Civil War, Kansas was a new state. Kansas did not allow slavery in the state constitution. Kansas fought on the side of the Union, although there was a big pro-slavery feeling. These divisions led to some of conflicts. The conflicts included the Lawrence Massacre in August 1863. Later the state witnessed the defeat of Confederate General Sterling Price by Union General Alfred Pleasonton at Mine Creek.

Kansas had been admitted as a state of the Union in January 1861. This was very shortly before the outbreak of the Civil war. There had been some guerrilla fighting between pro-slavery and anti-slavery groups. The fighting became known as Bleeding Kansas. After three constitutions, the fourth, called the Wyandotte Constitution, was approved by the voters and sent to the United States Congress for approval and statehood.

Kansas entered the Union as a free state and the 34th state on January 29, 1861. Even after it became a state, there were still hard feelings in Kansas. The Kansas-Missouri border continued to be terrorized by Guerrilla bands from both sides.

But statehood did not settle the hard feelings in Kansas — or the violence. Pro-slavery people still fought at the Kansas-Missouri border throughout the war. Lawrence, a free-state place in the 1850s, was burned, and more than 150 men and boys were killed by a pro-Southern irregular army under William Quantrill in 1863.

Less than three months after Kansas became a state, on April 12, Fort Sumter was attacked by Confederate troops and the Civil War began. In Washington D.C., there were rumors that President Abraham Lincoln would be kidnapped or even assassinated. A senator from Kansas, James Henry Lane organized 120 men from Kansas called the "Frontier Guard". For three weeks they remained in the White House to protect the President. Most Kansans favored joining the Union in the war. Governor Charles Robinson and Senator Lane recruited troops for the Union Army. During the war the federal government called for a total of 16,654 men from Kansas. But more than 20,000 enlisted and the state sent 19 regiments and four batteries to fight for the Union Army. Some of the men came from other states as Kansas only had about 30,000 men old enough to join the military. Kansas soldiers suffered a total of about 8,500 casualties during the war.

The first action in Kansas was not between the rival armies. It was a guerrilla raid in August 1863 by pro-slavery irregular forces led by W.C. Quantrill. They attacked the city of Lawrence, a centre of anti-slavery sentiment. They killed about 180 men and boys and destroyed a number of buildings. As the raiders could be heard shouting “Remember Osceola!”, the attack was taken to be a reprisal for an earlier raid by anti-slavery jayhawkers on Osceola, Missouri. Some believed that it was also a response to the recent deaths of some of the raiders’ imprisoned womenfolk, when their jailhouse collapsed, perhaps by design. (Recent research shows that the collapse was almost certainly accidental.) The massacre outraged the Confederate government, which had granted recognition to Quantrill under the Partisan Ranger Act, but now withdrew support from irregular forces. 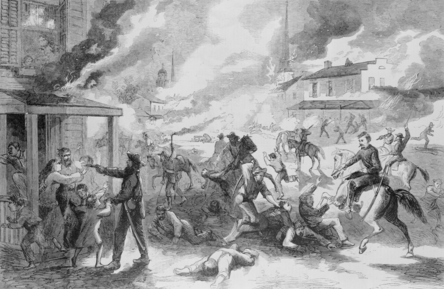 Quantrill's Raid into Lawrence, Kansas destroyed much of the city

On October 25, 1864, a series of three battles occurred. The first two in Linn County, Kansas, with the final in Vernon County, Missouri. The first was the Battle of Marais des Cygnes (also called the "Battle of Trading Post"). The second was a cavalry battle called the Battle of Mine Creek. This was a significant battle between mounted cavalry for Confederate forces and several brigades of Union cavalry that were pursuing General Price. They were between Major General Sterling Price, leading the Missouri expedition, against Union forces under Major General Alfred Pleasonton. Price, after going south from Kansas City, was initially met by Pleasonton at Marais des Cygnes. At the end of the day, the Confederate army was destroyed as a fighting force and withdrew into Arkansas.

All content from Kiddle encyclopedia articles (including the article images and facts) can be freely used under Attribution-ShareAlike license, unless stated otherwise. Cite this article:
Kansas in the American Civil War Facts for Kids. Kiddle Encyclopedia.