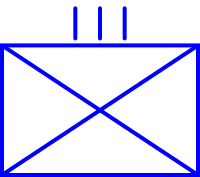 Standard NATO symbol for a regiment of several battalions, indicated by the III. The shape, colour and pattern indicate friendly infantry.

A regiment is a military unit. Their role and size varies markedly, depending on the country and the arm of service.

In Medieval Europe, the term "regiment" denoted any large body of front-line soldiers, recruited or conscripted in one geographical area, by a leader who was often also the feudal lord of the soldiers.

By the end of the 17th century, regiments in most European armies were permanent units, numbering about 1,000 men and under the command of a colonel.

During the modern era, the word "regiment" – much like "corps" – may have two somewhat divergent meanings, which refer to two distinct roles:

In many armies, the first role has been assumed by independent battalions, battlegroups, task forces, brigades and other, similarly-sized operational units. However, these non-regimental units tend to be short-lived; and regiments have tended to retain their traditional responsibilities for ceremonial duties, the recruitment of volunteers, induction of new recruits, individual morale and esprit de corps, and administrative roles (such as pay).

A regiment may consequently be a variety of sizes:

All content from Kiddle encyclopedia articles (including the article images and facts) can be freely used under Attribution-ShareAlike license, unless stated otherwise. Cite this article:
Regiment Facts for Kids. Kiddle Encyclopedia.