The Lawrence Massacre (also known as Quantrill's Raid) was an attack on the town of Lawrence, Kansas on August 21, 1863. The attack was a battle in the U.S. Civil War. The Confederates won the battle, as group of guerillas led by William Quantrill rode into town and shot every man they saw. About 150 people were killed.

The attack targeted Lawrence because the city supported of abolition and because it was a center for the Jayhawkers. The Jayhawkers were free-state militia groups known for attacking plantations in pro-slavery Missouri's western counties.

By 1863, Kansas had had a lot of violence. This is because people disagreed about whether Kansas should allow slavery or not.

In the summer of 1856, the first sacking of Lawrence started a guerrilla war in Kansas that lasted for years. John Brown might be the most famous person involved in the violence of the late 1850s that fought on the abolitionist or Jayhawker side. However, there many groups fought for each side during the "Bleeding Kansas" period.

By the beginning of the American Civil War, Lawrence was already a target for pro-slavery violence. This is because Lawrence was seen as the anti-slavery city in the state and, more importantly, a starting place for Union and Jayhawker attacks into Missouri. At first, the town and area around it were very prepared; they reacted strongly to any rumors that pro-slavery people might be coming to Lawrence. However, by the summer of 1863, this never happened, so the people were not very afraid, and defenses were relaxed.

Reasons for the attack

Lawrence was a headquarters for a group of Jayhawkers (sometimes called "Red Legs"). They had started a campaign in late March 1863 with the goal to end support from the people for the Confederate guerillas. Union General Blunt described the actions of the soldiers as if "a reign of terror started, and no man's property was safe, nor was his life worth much if he fought them in their plans to rob and steal." Many Jayhawker leaders like Charles "Doc" Jennison, James Montgomery, and George Henry Hoyt attacked Western Missouri. This upset both pro-southern and pro-Union civilians and politicians. The historian Albert Castel says that revenge was the main reason. The Jayhawkers also wanted to steal, but revenge was their main reason.

The feeling of revenge in the attack on Lawrence was confirmed by the survivors.

Quantrill said that his reason for the attack was "to steal and destroy the town as revenge for Osceola." That was a reference to the Union's attack on Osceola, Missouri in September 1861. It was led by Senator James H. Lane. Osceola was plundered, and nine men were given a drumhead court-martial trial and executed.

A man from Hester named Henry Thompson tried to run to Lawrence to tell the people there that an attack was coming. He was able to run all the way to Eudora before he was too tired. An unknown man riding a chaise came by Thompson to ask if he needed help. Thompson told him that he ran all the way from Hester, and that "I got to get to Lawrence...they're going to attack Lawrence." Thompson and the man were able to get some people from Eudora to go to Lawrence to warn of an attack, they were too late.

Around 450 guerrillas came near Lawrence shortly after 5 a.m. Their first goal was to get to the Eldridge House, a big brick hotel in the middle of Lawrence. After they gained control of the building (which became Quantrill's headquarters during the raid), Quantrill's men went into smaller groups that spread throughout Lawrence. For the next four hours, the raiders pillaged and burned 25% of the buildings in Lawrence. All businesses except for two were burned. They looted most of the banks and stores in town. They killed more than 150 people. Everyone who was killed were men and boys. Some sources say 183 people were killed. An 1897 source says that among the dead were 18 of 23 unmustered army recruits. By 9 a.m., the raiders were leaving Lawrence.

Because the raiders wanted revenge, they had a list of people they wanted to kill a buildings they wanted to burn. James H. Lane was at the top of the list. Lane was a military leader and a supporter of the Jayhawkers, a group of raiders that killed people and destroyed land in western Missouri early in the Civil War. Lane escaped by running through a cornfield while wearing his nightshirt. John Speer had been put into the newspaper business by Lane, was one of Lane's biggest political supporters, and was also on the list. Charles L. Robinson, first governor of Kansas and an abolitionist, may also have been on the list, although he was not killed.

Many have said Quantrill's decision to kill young boys along with adult men as a very bad part of the attack. 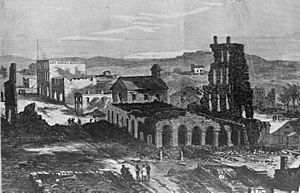 Lawrence destroyed as shown in Harper's Weekly. The burned ruins of the Eldridge House are in the front.

The Lawrence massacre was one of the bloodiest events in the history of Kansas. The Plymouth Congregational Church in Lawrence wasn't destroyed, but many of its members were killed. Also, many of its records were destroyed.

After the attack, Quantrill brought his men south to Texas for the winter. By the next year, however, the raiders disbanded as a unified force. They were unable to get similar successes. Quantrill himself died of wounds he got in Kentucky in 1865. By that point, he had only a few supporters left. Frank James and his younger brother, Jesse James were some of his supporters.

After Quantrill's attack, the Union built several military posts on Mount Oread. These were built to help guard the rebuilt city. However, no more attacks happened in Lawrence, and these forts were removed.

All content from Kiddle encyclopedia articles (including the article images and facts) can be freely used under Attribution-ShareAlike license, unless stated otherwise. Cite this article:
Lawrence Massacre Facts for Kids. Kiddle Encyclopedia.