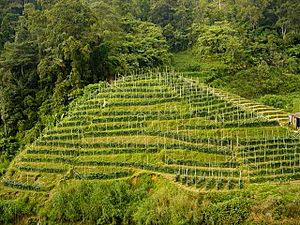 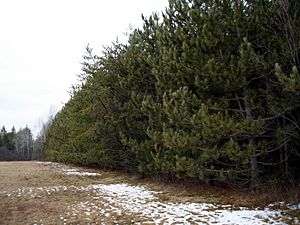 A plantation is a large farm which is specialized on farming one type of crop. Pantations grow cash crops, mostly for export, and less for local use. Crops grown on plantations include banana, sugarcane, coffee, tea, cotton and tobacco.

Some of the problems with plantations come from the fact that they are monocultures, that is there is only one kind of crop that is grown there. This makes them vulnerable to pests, for example. Among the earliest examples of plantations were the latifundia of the Roman Empire. They produced large quantities of wine and olive oil for export. Plantation agriculture grew rapidly with the increase in international trade. Like every economic activity, it has changed over time. Earlier forms of plantation agriculture were associated with large disparities of wealth and income, foreign ownership and political influence, and exploitative social systems such as indentured labor and slavery.

Farm or home plantations are typically established for the production of timber and fire wood for home use and sometimes for sale. Management may be less intensive than with Industrial plantations. In time, this type of plantation can become difficult to distinguish from naturally regenerated forest.

Teak and bamboo plantations in India have given good results and an alternative crop solution to farmers of central India, where conventional farming was popular. But due to rising input costs of farming many farmers have done teak and bamboo plantations which require very little water (only during first two years). Teak and bamboo have legal protection from theft. Bamboo, once planted, gives output for 50 years till flowering occurs. Teak requires 20 years to grow to full maturity and fetch returns.

Probably the single most important factor a plantation has on the local environment is the site where the plantation is established. If natural forest is cleared for a planted forest then a reduction in biodiversity and loss of habitat will likely result. In some cases, their establishment may involve draining wetlands to replace mixed hardwoods that formerly predominated with pine species. If a plantation is established on abandoned agricultural land, or highly degraded land, it can result in an increase in both habitat and biodiversity. A planted forest can be profitably established on lands that will not support agriculture or suffer from lack of natural regeneration.

The tree species used in a plantation is also an important factor. Where non-native varieties or species are grown, few of the native fauna are adapted to exploit these and further biodiversity loss occurs. However, even non-native tree species may serve as corridors for wildlife and act as a buffer for native forest, reducing edge effect.

Once a plantation is established, how it is managed becomes the important environmental factor. The single most important factor of management is the rotation period. Plantations harvested on longer rotation periods (30 years or more) can provide similar benefits to a naturally regenerated forest managed for wood production, on a similar rotation. This is especially true if native species are used. In the case of exotic species, the habitat can be improved significantly if the impact is mitigated by measures such as leaving blocks of native species in the plantation, or retaining corridors of natural forest. In Brazil, similar measures are required by government regulation 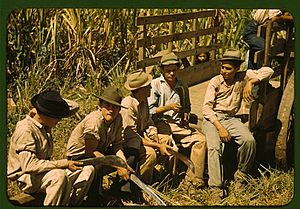 Sugar plantations were highly valued in the Caribbean by the British and French colonists in the 17th and 18th centuries and the use of sugar in Europe rose during this period. Sugarcane is still an important crop in Cuba. Sugar plantations also arose in countries such as Barbados and Cuba because of the natural endowments that they had. These natural endowments included soil that was conducive to growing sugar and a high marginal product of labor realized through the increasing number of slaves. 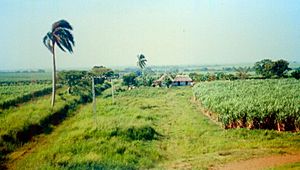 Fruit orchards are sometimes considered to be plantations.

These include tobacco, sugarcane, pineapple, and cotton, especially in historical usage.

Before the rise of cotton in the American South, indigo and rice were also sometimes called plantation crops. 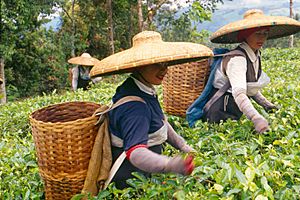 When Newfoundland was colonized by England in 1610, the original colonists were called "Planters" and their fishing rooms were known as "fishing plantations". These terms were used well into the 20th century.

The following three plantations are maintained by the Government of Newfoundland and Labrador as provincial heritage sites:

All content from Kiddle encyclopedia articles (including the article images and facts) can be freely used under Attribution-ShareAlike license, unless stated otherwise. Cite this article:
Plantation Facts for Kids. Kiddle Encyclopedia.