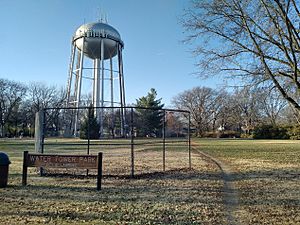 Lawrence, Kansas was not well defended in the early part of the American Civil War. They started defending it after William Quantrill's guerrilla raid on August 21, 1863. By early 1864 Union soldiers permanently stayed on the top and hills of Mount Oread, which was at Lawrence's southwest. It seems the camp was first named Camp Ewing, after Brig. Gen. Thomas Ewing.

The military area on Mount Oread was used until the end of the Civil War. When the war ended, there was no reason to keep them, so they were destroyed.

All content from Kiddle encyclopedia articles (including the article images and facts) can be freely used under Attribution-ShareAlike license, unless stated otherwise. Cite this article:
Mount Oread Civil War posts Facts for Kids. Kiddle Encyclopedia.