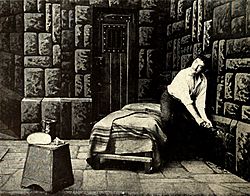 The Count of Monte Cristo is a classic novel about revenge

Revenge is doing something to hurt another person because they believe that person hurt them. It is also called vengeance, payback, retribution or retaliation. It can also be doing something to get even for an insult, real or perceived. Anthropologists have discovered chimpanzees will try to get revenge on thieves who steal their food.

Sometimes revenge or acts of revenge are actually other feelings disguised as revenge.

All content from Kiddle encyclopedia articles (including the article images and facts) can be freely used under Attribution-ShareAlike license, unless stated otherwise. Cite this article:
Revenge Facts for Kids. Kiddle Encyclopedia.